In honor of this day, we invite you to explore the Artstor bestiary, a virtual menagerie as diverse as the animal kingdom itself, where our pets and companions are presented with majesty and poignancy. Leonardo’s sleek, muscular and somewhat enigmatic ermine poised on the slashed sleeve of Cecilia Gallerani, the young mistress of Ludovico Sforza, communicates both the purity of the sitter and the power of Sforza, and was in fact the coveted pet of high Renaissance aristocrats, c. 1490.  In striking contrast, Milton Rogovin’s photograph of a working-class couple and their rabbit taken some 500 years later, glows with sheer pride and pleasure.

The dangling rag-doll of the couple’s affection is the antithesis of Durer’s monumental and composed hare, 1502, a likeness that has come to epitomize the family Leporidae. 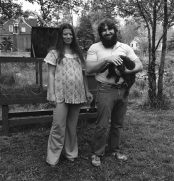 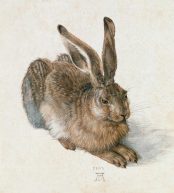 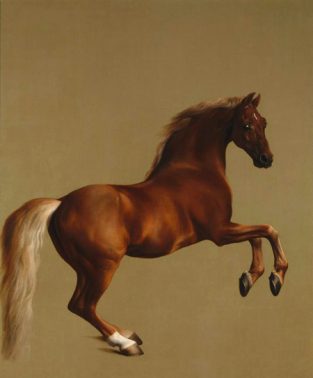 The horse, our closest ally in work and in play, is immortalized in imposing portraits such as Stubbs Whistlejacket, 1762, and in depictions like Castiglione’s (known in his adopted home country of China as Lang Shining) scroll, a historical narrative of tribute – three splendid Kazakh horses being offered to the Chinese emperor, 1757.

Lest we forget our best friend the dog, George Stubbs’ curly-haired pooch is the earnest distillation of dogged devotion and purpose, and he stands in for the hundreds of canines in the Artstor Digital Library. 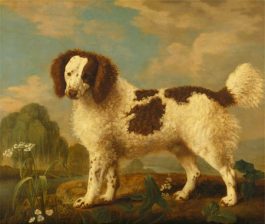 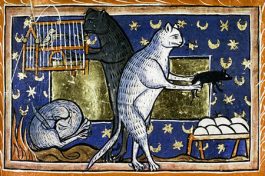 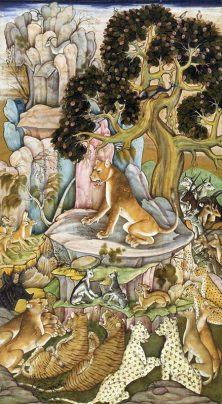 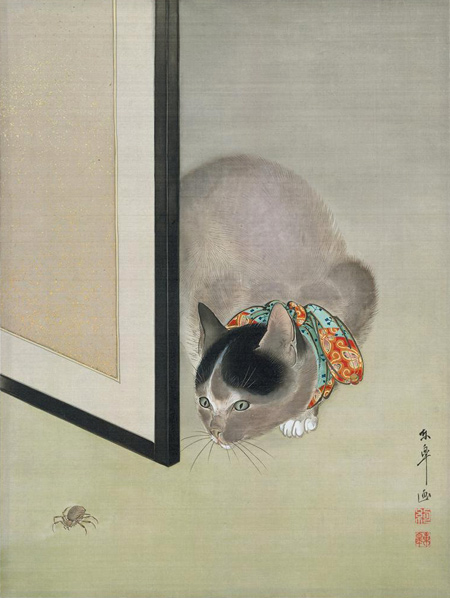 Felis catus, arguably our longest-standing companion, must not be overlooked.  While her legendary stealth is parodied in a 13th-century bestiary illumination depicting thieving cats tiptoeing off with birds and mice (and strangely human faces with sheepish expressions), it is celebrated in Ôide Tôkô’s study of patient pursuit and his apparent pleasure in the replication his sitter’s luxuriant coat, Meiji period (1868-1912).

On the wilder side of the felids, lions, tigers, cheetahs, and leopards abound, as for example, in the enchanting and whimsical Lion’s Court, a Mughal miniature by Farrukh Chela, c. 1596.

For more scientific interpretations of exotic fauna, the collected renderings from Cook’s Voyages to the South Seas offer up splendid specimens like Forster’s King Penguin of 1775, one among hundreds of finely delineated feathered, finned and furred beasts. Should you wish to compile your own bestiary, we suggest you mine the following collections in the Artstor Digital Library:

Magnum Photos, and Panos Pictures, for a wide range of photographs depicting pets and their humans, as well as animals in the wild.

Manuscripts and Early Printed Books (Bodleian Library, University of Oxford), for illuminated beasts and the fantastic creatures of the marginalia.

For masterworks featuring animals, browse the collections listed below which feature paintings and sculpture from international museums, as well as those of individual museums in the Artstor Digital Library, as, for example, The Metropolitan Museum of Art, The National Gallery, London, the Rijksmuseum, and many others.

Lukas – Art in Flanders including The Royal Museum of Fine Arts, Antwerp, and many other Flemish institutions.

Réunion des Musées Nationaux, including The Louvre and other national and regional museums of France.

You may also be interested in Travel Awards 2011: Picturing Animals and Arnold Genthe–cat photographer?