As we get close to Easter, you’re sure to run into at least a few mentions of the renowned Fabergé eggs. And rightly so, as these decorative objects are ingenious and rich with history. But did you know there is much more to Fabergé than just eggs?

The reason the eggs became so famous began in 1885, a year after Carl Fabergé was appointed court jeweler for Tsar Alexander III. Alexander commissioned the House of Fabergé to make an Easter egg as a gift for his wife, the Empress Maria Fedorovna. What Carl came up with is legendary: an enameled gold shell representing an egg that opened to reveal a gold yolk, which also opened to produce a gold chicken that in turn opened to reveal a miniature crown from which a ruby egg was suspended. It’s no surprise that the Tsar made buying Fabergé eggs for his wife an annual tradition, nor that they continue to be cherished.

But it would be a pity for the eggs to overshadow the House of Fabergé’s other achievements. Principal among these were Carl’s delightful carved miniatures, which go far in justifying the declaration by the 1900 jury at the Paris Exposition Universelle that “his work reaches the limits of perfection.” 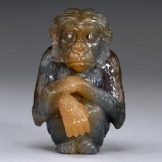 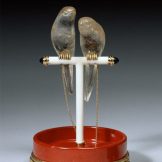 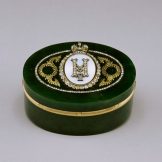 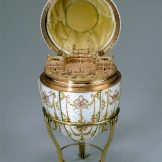 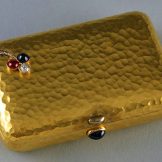 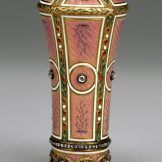 Peter Carl Fabergé ; Workmaster: Mikhail Perkhin; Manufacturer: House of Fabergé | Parasol Handle | ca. 1900 | pink enamel on guilloché gold, diamonds
The Walters Art Museum includes a selection of exquisite pieces such as this banded agate chimpanzee, a pair of cockatoos and a pair of parakeets made of precious and semi-precious stones, a spotted red jasper rhinoceros, a jasper anteater (barely longer than an inch), and a nephrite hippopotamus, all with diamonds for eyes.

The Cleveland Museum of Art includes more carved animals, like a poodle carved out of agate with inset ruby eyes (which stands only two and a half inches high), sleeping puppies made of agate, chalcedony, and marble, and an elephant-shaped bell push (the button to ring a bell) carved of jade, gold, rubies, emeralds, and diamonds.

The House of Fabergé also created a full range of jewelry and other ornamental objects. Do a keyword search in the Artstor Digital Library for faberge to find miniatures including a chair, a shoe, a teapot, and even a bidet! You’ll also discover luxurious parasol handles, boxes and make-up cases, clocks, and more, including dazzling military insignias from the collection of the Fine Arts Museums of San Francisco. And yes, of course, a great selection of eggs.