Patent medicines and advertising cards from the Oskar Diethelm Library

At the beginning of the nineteenth century the prevailing medical belief that “the more dangerous the disease, the more painful the remedy” meant that bloodletting, purging, and blistering were often prescribed. Not surprisingly, this led to the development of a market in patent medicines promising painless cure-alls. Manufacturers used advertising cards to promote a world of pleasant medical fixes with friendly graphics and reassuring claims and testimonials. The ingredients in these patent medicines might have been as harmful as the illness, but they were more tempting than the agonizing solutions offered by doctors.

The American Medical Association fought back, culminating in the passage of the Pure Food and Drug Act of 1906, which required patent medicines to list their ingredients and be accurately labeled. The law dealt a huge blow to the industry. Advertising cards didn’t fare much better, as mail-order catalog companies overtook the general stores where the cards were mainly distributed. 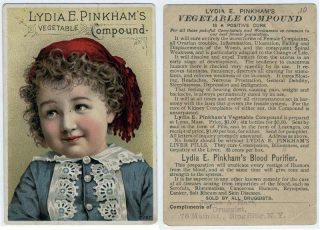 The Oskar Diethelm Library at Weill Cornell Medical College has created Good for What Ails You? Patent Medicines and Advertising Cards, an online exhibition that offers insight into the common ailments suffered by Americans and provides a glimpse of the evolving and changeable nature of medicine in the nineteenth century.

The exhibition was created using JSTOR Forum, Artstor’s Web-based service for cataloging and managing digital collections. The images are also part of Artstor’s public collections, which are openly available and fully searchable to anyone–with or without an Artstor subscription.