Celebrating the storming of the Bastille

No matter where you were in the U.S. this Fourth of July, you probably had the opportunity to enjoy the Independence Day fireworks. Now it’s our friends’ turn in France to enjoy their revolution celebration with fireworks. Bastille Day, or Le quatorze juillet, commemorates the storming of the Bastille prison in Paris on July 14, 1789. The capture of the prison marked the beginning of the French Revolution and the end of Louis XVI’s absolute monarchy. Three years later the First Republic was born.

On the morning of July 14, a group of craftsmen and salesmen ran to the Hôtel des Invalides, a home and hospital for wounded veteran soldiers, to steal weapons. They found 29,000 rifles, but no gunpowder. The crowd then turned towards the Bastille, where they knew powder was stocked. 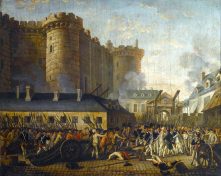 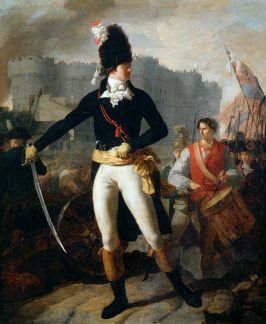 At the time of the raid, the Bastille was only guarded by 80 “invalides” and some 30 grenadiers. The Marquis de Launay, the governor of the invalides, agreed to meet representatives of the crowd inside the prison. But the negotiations ended when a group of revolutionaries entered the Bastille and the guards fired on the crowd, killing hundreds.

A team of soldiers showed up to defend Louis XVI’s guards, but sided with the mob instead and defeated the guards in a few hours. That night, a crowd of 800 began to destroy the Bastille, a process that lasted a few days, as evidenced by Pierre Antoine de Machy’s Demolition of Bastille, July 17, 1789.