Bryn Mawr College’s free and open Albert Winslow Barker Collection brings back to light the work of an unfairly neglected American lithographer of the 1930s and uncovers his little-known photographs. And there is much to admire.

Albert Winslow Barker (1874-1947) began his career making charcoal drawings, and then studied lithography in 1927. By 1936, as Barbara T. Simmons points out in The Pennsylvania Magazine of History and Biography, he had found success: Barker had solo exhibitions at the Smithsonian and at the Corcoran Gallery, and 32 of his prints were in the permanent collections of 15 museums. He supported himself on sales of his art until his death in 1947 (though his photographs remained unknown and were not exhibited until the early 1980s).

But by the time of Barker’s death a new American art movement was on the rise. Brash, large, colorful, and abstract – essentially the opposite of Barker’s quiet, traditional, monochromatic realism – Abstract Expressionism took hold of the galleries and museums, and Barker was all but forgotten. Thankfully, Elizabeth R. Barker, the artist’s daughter, donated his art and archival collections to Bryn Mawr College, which is making the work freely accessible to all.

Browse through the nearly 500 images in Artstor for a rounded look at the artist’s oeuvre, including photographs from trips to Switzerland, Greece, and Italy in 1910 and 1916, images of Greek dress that Barker used for his lectures, and lithographs of his beloved Pennsylvania landscape from the 1920s to the 1940s. 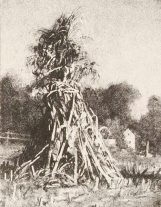 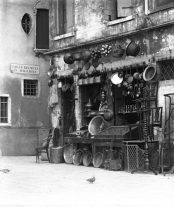