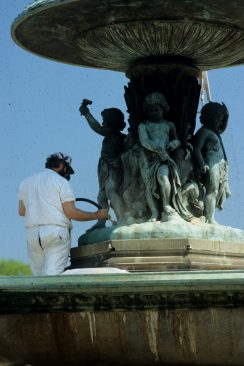 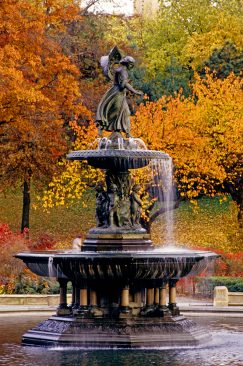 Artstor: What do you think was your greatest accomplishment in the restoration of Central Park?

Elizabeth Barlow Rogers: Leading the design team in the development of the Management and Restoration Plan, and hiring photographer Sara Cedar Miller to document its progress, as this record of the Conservancy’s work over the past thirty-five years is now helping others in their efforts to restore and maintain their parks.

Renovating a Park consisting of 843 acres, particularly one that had been so long neglected, must have been incredibly daunting. What was the most significant challenge you initially encountered?

Turning a small group with a mission into an ongoing organization capable of running the park. In the beginning it was just me, one person who oversaw education, another who supervised the horticultural interns, and one who helped with grant proposals. When I started there had only been one gardener in the payroll! But the staff grew quickly. We had a vision, we built a board, and we had a plan. We went to foundations and corporations, and created a public-private alliance that today has a budget of $40 million. Rebuilding Central Park: A Management and Restoration Plan was published in 1985. While offering a methodology for other park conservancies, it also continues to guide Central Park’s ongoing restoration, which now includes some of the original projects the conservancy undertook back in the 1980s.

What are some of the goals of the Foundation for Landscape Studies, which you started and continue to lead?

There are many, and I encourage you to visit our website to learn more, but among them, we want to continue publishing our journal Site/Lines, a literary forum for essays and reviews of books, exhibitions, and designs dealing with landscape themes and projects. Another one is organizing landscape-related exhibitions in collaboration with institutions such as the Morgan Library, and co-publishing books that relate to these exhibitions.

With your husband, you also own the C. L. Browning Ranch in Texas and oversee the restoration of its natural beauty, cultural history, and ecological health. The Ranch’s mission includes finding and sharing information to improve the stewardship of land, especially of recreational ranches. How do the troubles in these ranches compare to those of public parks such as Central Park?

Although similar in size, the stewardship of the two present very different challenges. Central Park is a public space protected from threat of real estate market forces, whereas the ranch is not and could, if not protected from development, be sold and divided into “ranchettes.” But both require informed environmental protection and ongoing daily management, and both share the same ethic of environmental stewardship management.

More than 1,100 images of Central Park contributed by the Foundation for Landscape Studies have just gone live in the Artstor Digital Library. Why did you decide to make your images available via Artstor?

We wanted to make the Foundation’s images broadly available to teachers and students. Most of the images in the Foundation’s collection in Artstor are photographs taken by me or by professionals who do photographs of artworks—in this case images from my rare book collection. I wanted my large collection of images to be digitized so that all the photographs that I took in parks and gardens around the world while writing my book Landscape Design: A Cultural and Architectural History would be available to others, especially professors assembling PowerPoint lectures such as the ones I have given in my own landscape history courses and public lecturing on Central Park.

I subsequently received permission from the Central Park Conservancy to include in this archive 1,100 photographs of Central Park taken over the course of the Conservancy’s existence. The Central Park slides are an especially valuable resource because of the story they tell, with before-and-after images depicting the park’s ongoing improvement over the past thirty-five years.