Enter opera singer Émilie Ambre. Manet met Ambre in the summer of 1879 at a spa outside Paris where he was receiving hydrotherapy treatment for a leg ailment. The singer was engaged to sing Carmen in New York and Boston that winter, and Manet painted her portrait, Émilie Ambre in the role of Carmen. They came up with what appeared to be a winning plan: She would take The Execution of Maximilian to America in her baggage, and charge the public to view it. This was the first painting by Manet to come to the United States, and it was to travel to New York, Boston, and Chicago. 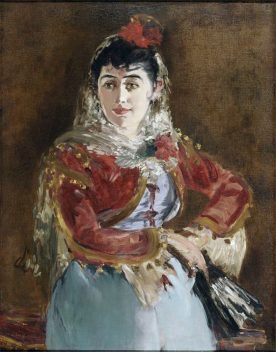 Édouard Manet, Portrait of Émilie Ambre as Carmen, c. 1879. Image and data from the Philadelphia Museum of Art 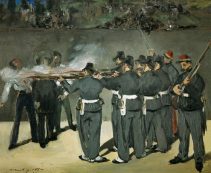 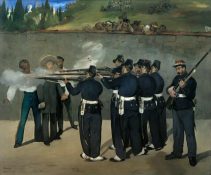 As Ian Dunlop recounts in Shock of the New: Seven Historic Exhibitions of Modern Art, Count Gaston de Beauplan, Ambre’s friend and manager, helped with the arrangements and printed handbills with an image of the singer on one side and the painting on the other. The flier read: “Come in! Come in to see the famous picture of the famous painter Ed. Manet!” Despite that irresistible entreaty, the exhibitions were a bust. There weren’t enough visitors to even cover expenses, and the Chicago showing was cancelled. Count Gaston sent a bill of the losses to Manet.

The next big presentation of Manet’s work in America happened through the forward-thinking art dealer Paul Durand-Ruel. As Marci Regan writes, Durand-Ruel included Manet in the Foreign Exhibition in Boston in September of 1883 along with that of other Impressionists, and the show was positively received. But sadly, Manet had died that spring, never having experienced success—or scandal—in America.

In 1913, Manet’s work was included in an American exhibition that became a succès de scandale on par with the salons of the 1860s: the Armory Show in New York. But, alas, the paintings that shocked visitors were by Duchamp and Matisse. Manet was presented along Gustave Courbet and Edgar Degas, figures a critic described as “‘wild men’ in their day, but infinitely civilized now.” The artist had bypassed outrage and slipped directly into eminence.

The images of The Execution of Maximilian in this post come from The National Gallery, London, the Städtische Kunsthalle Mannheim, and the Ny Carlsberg Glyptotek (the last two via the Erich Lessing Culture and Fine Arts Archives), and Émilie Ambre in the role of Carmen comes from the Philadelphia Museum of Art. The Artstor Digital Library offers more than 600 images of works by Manet; you can search for Manet Maximilian to find related lithographs and drawings.