Robin Michaels and Kristen Reed painted an exquisite mural of children in a park in a vacant lot on East Fourth near Avenue D, subsidized in part by Materials for the Arts. The mural appears in a few scenes of the film Green Card, shot on location here.

The murals at El Bohio Cultural and Community Center on East Ninth Street, sponsored by the neighborhood group Charas and painted by Freddy Hernandez with about ten neighborhood teenagers as paid assistants, were a testament to the grassroots activism of Charas members. Armando Perez, photographer and Charas Chair explained to me that Charas was founded in the late 1960s by locals to provide creative alternatives to the gang violence prevalent at the time. 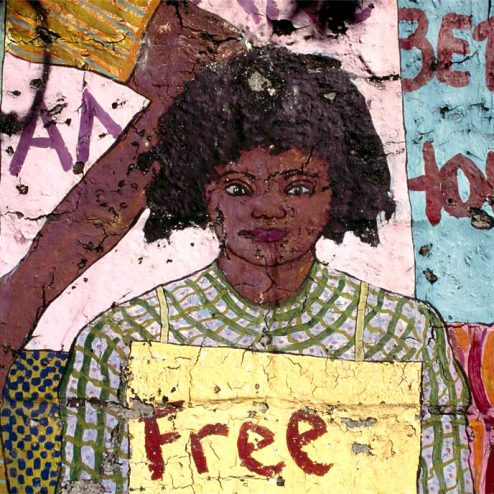 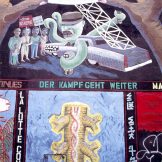 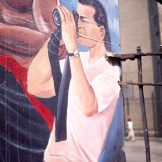 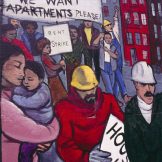 Another suite of murals that intrigued me was the La Lucha Continua Murals, twenty-six individual and collective works on four buildings around a central plaza. These murals were painted in 1983 under the direction of Eva Sperling Cockcroft in a park on East Ninth Street and Avenue C. I later found the article Cockcroft had written about the project in Community Murals (1985) and contacted her in California. She was surprised to get the photographs showing the murals, still vibrant after almost ten years. Art Makers, Inc., their artist-run, not-for-profit, politically oriented community organization worked without pay and with donated materials. Their themes were intervention in Central America, apartheid in South Africa, and gentrification in their local communities. More than thirty artists were involved in the murals of La Lucha Continua, with actual cash spent totaling about US $3,000. No one was paid. The murals were compelling in their message, and still visually powerful when I photographed them almost a decade after they had been painted.

As a painter and art historian, as well as photographer, I drew parallels between New York City street art and the painted walls, murals, and caves of human history. In a genre as old as art itself, and predating the written word, “artists are motivated by a shared desire to make a signature, a magical sign, an affront to the limits of time and place, an expansive gesture out into a world larger than the one we call ‘neighborhood’ ” – as I wrote for a magazine from Singapore. 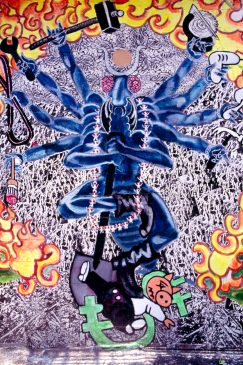 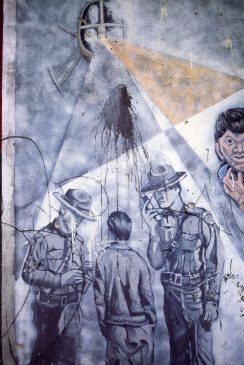 Artist Chad Williams, who had grown up in the Bronx with subway writers who risked arrest and abuse to write their names on the trains that sped through the five boroughs, explained the motivation: “I got my stuff running. It’s, ‘I was here.’ Boom. That’s all… If you’re living large and your tag is nice, you put it up really big and bold.”

From the project kids, who were vulnerable vandals, the movement ignited hot public debate, influenced artists, went worldwide, and finally hit the museums. Appropriating advertising methodology, social networking, insider/outsider politics, and coded communication, graffiti and graffiti writers challenged the hierarchies of the art world, affronted urban authorities, excited or appalled audiences. In short, graffiti changed boundaries, borders, and contents, challenging the exclusivity of what was referred to as “the art world.”

During the period that I photographed street art in Manhattan, I had already moved to Southeast Asia, and was living away from the U.S. for much of the time. I was involved in photographing the arts and architecture of Southeast Asia. So, when I was in New York periodically, walking the streets of my neighborhood, I looked with both an insider’s and an outsider’s eye, documenting neighborhood walls with an almost anthropological sense of place.