But it looks so real! The parallel rise of photography and Spiritualism

Hablot Knight Browne, The London Stereoscopic Company. The Ghost in the stereoscope, 1856 – 1859. Image and original data provided by Rijksmuseum: www.rijksmuseum.nl

In 1862, amateur photographer William H. Mumler of Boston took a self-portrait in his studio, unaware of a ghostly apparition lurking directly behind him. It wasn’t until he viewed the resulting image of a pellucid arm draped casually across his shoulder that he realized the camera must have exposed the lingering spirit of his deceased cousin. With this eerie, novel image, Mumler, a jewelry engraver by trade, became the first of many photographers to claim having photographed a spirit. Photographs like Mumler’s provided timely evidence that spirits of the deceased freely interacted with the world of the living–a discovery he would milk for profit within the framework of the Spiritualist movement.

The Spiritualists were a loosely organized semi-religious group active in the mid-to-late 1800s. They shared a number of core beliefs: that human spirits are eternal; that spirits possess superior wisdom from which the living may benefit; and that spirits can communicate with the living world. Mediums–individuals practiced in conjuring spirits of the dead–led séances during which believers (and even skeptics) could communicate with spirits, usually those of deceased loved ones. Anyone with “the gift” could become a medium with practice and devotion, although the most revered mediums excelled at mystical dramatics which attracted large numbers of devotees.

William H. Mumler, Herbert Wilson of Boston with the spirit of a young woman to whom he had once been engaged, ca. 1865. George Eastman House

The height of Spiritualist practice coincided with a global obsession with photography that occurred in the decades after its invention in 1839. Viewers marveled at the camera’s incredible ability to render the world with veracity and detail never before seen. Photography provided a means of seeing what was overlooked, freezing time so viewers might linger on minute architectural details or the delicate wrinkles in a sitter’s face. Like Spiritualism, photography was a popular interest of middle and upper-class Americans. By the time Mumler had taken up photography as a hobby in the 1860s, the overlap of Spiritualist followers and photography enthusiasts was inevitable. Photography’s ability to expose the ethereal and unobservable would become central to Spiritualists’ fight for acceptance and legitimacy.

So how did Mumler become the first person to photograph a spirit? Purely by accident, it seems. Back then, early photographic negatives were created using cleanable and recyclable glass plates. Recycling poorly-cleaned plates resulted in small areas of a previously exposed image remaining adhered to the glass. When this glass was reused, a double exposure was created, and when the overlapped image contained a face, it appeared as a semi-transparent and other-worldly presence in the final photographic print.

As it turns out, Mumler knew he had taken his self-portrait using an insufficiently cleaned plate, describing in his memoir how he shared the ghostly image with a Spiritualist friend as a gag. Noting his friend’s amazed reaction and unwavering belief in what he saw, Mumler realized he’d stumbled across a potentially lucrative venture—especially when his friend requested to share the image with his circle of Spiritualist friends. In Mumler’s Ghosts, Crista Cloutier describes the events that followed:

Soon enough, the Spiritualist journals The Herald of Progress in New York and The Banner of Light in Boston both announced that the first photograph of a spirit had been taken. Many Spiritualists saw this event as scientific verification of their beliefs. Mumler claimed to have been ‘mortified’ by this misinterpretation but, as ‘spirits’ continued to appear on the portraits he made, he felt he had stumbled upon a ‘wonderful phenomenon that really needed investigation.’

And investigate he did. Mumler set up shop in Boston as a photographer specializing in spirit photography and charged the then-high price of ten dollars per sitting. He photographed countless customers who hoped to comfort themselves with proof that their loved ones lived on as spirits, and sometimes even claimed he couldn’t conjure a spirit in a session just so he could request the sitter return (and pay) for another sitting when the spirits were feeling more cooperative. Clearly, Mumler was skilled at fulfilling hopes at maximum profit. 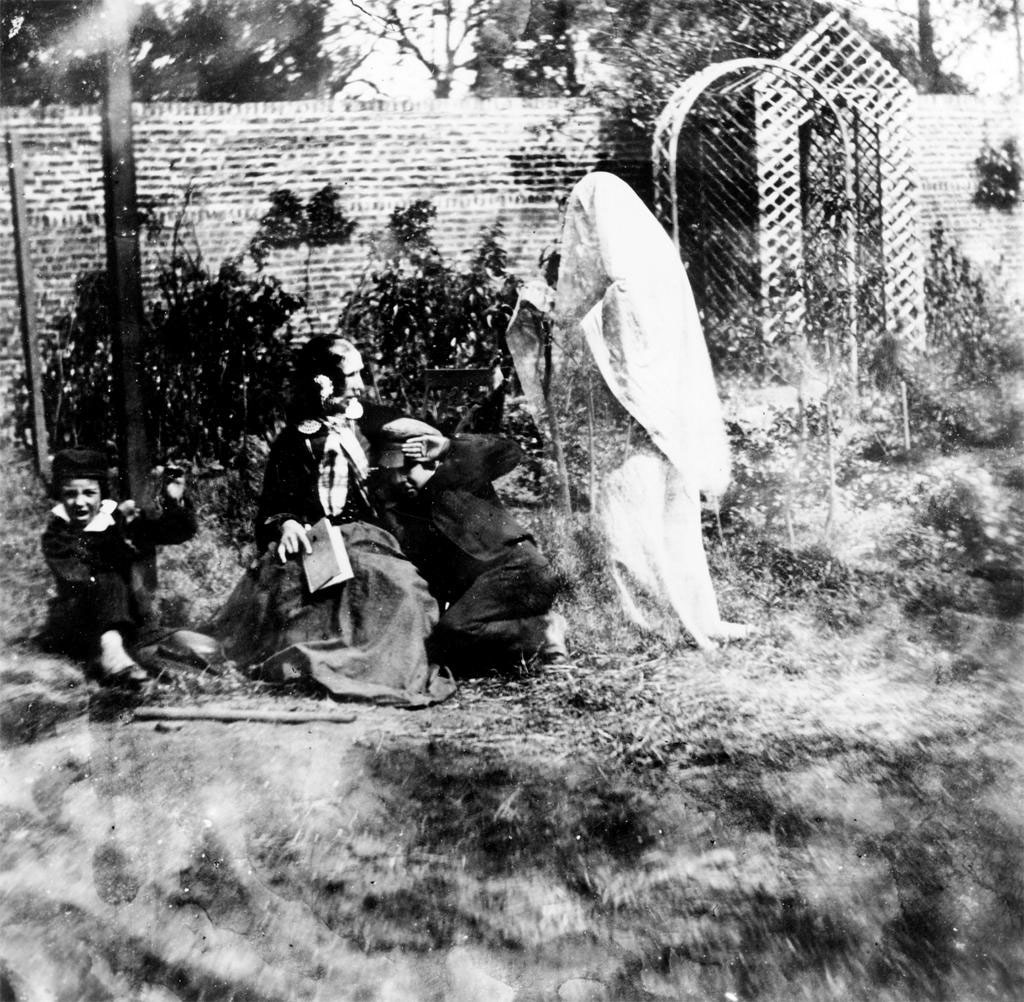 Alexander Melville Bell, A double exposure, 1860s. Eyes of the Nation: A Visual History of the United States (Library of Congress)

Interestingly, Mumler’s technique was something people had seen before. In Ghost Dialectics: Spirit Photography in Entertainment and Belief, Clément Chéroux indicates that this double exposure technique was already used to create a very different type of spirit photography: mass-produced stereoscopic images depicting comical ghost scenes–a practice so popular that guides to creating spiritual effects were written for stereoscopic image producers. Despite this, Mumler was able to gain legitimacy through his early notoriety in Spiritualist circles. With his flair for dramatic showmanship, he  fulfilled expectations  held by practiced believers, allowing his sitters to easily suspend disbelief.

As Mumler’s business grew, an increasing number of “spirits” had to be covertly exposed over images of his sitters. Given that Mumler’s spirits were conjured from reused negatives depicting living people he had previously photographed, it was only a matter of time before a one was recognized and his scam was exposed. In February of 1863, a sitter recognized a ghostly countenance as a living acquaintance who was photographed by Mumler weeks before, exposing him as a fraud. The outcry that followed eventually forced him to close his studio. A brazen man, he moved from Boston to New York in the late 1860s and opened a new studio, resuming his venture. This attempt would end far more dramatically: on April 21, 1869, Mumler was put on trial for deceiving his clients after an undercover investigator uncovered his ruse and presented evidence to the police. Although he was eventually acquitted (no one was able to catch him in the act of double exposure) he was shunned by the photographic community and his business never recovered.

The debunking of Mumler’s work didn’t stop other photographers from documenting “spirits” and other forms of occult phenomena through the 1920s, when spirit photography’s popularity began to wane. Remnants of the work these photographer-mediums are woven into popular culture to this day as we continuously attempt to reconcile our understanding of ghosts as a form of entertainment with our sometime belief in their actual existence, as evidenced by contemporary paranormal community belief in practices such as orb photography and electronic voice phenomenon recordings, as in this chapter of Alan Brown’s Ghost Hunters of the South.

The images in this post come to Artstor from the collections of the Rijksmuseum, the J. Paul Getty Museum, George Eastman House, and the Library of Congress’ Eyes of the Nation: A Visual History of the United States. Want to see more ghostly images from Artstor? Search spirit and narrow classification to photography.