On the origin of Veterans Day 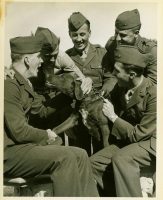 Armistice Day became Veterans Day in the United States in 1954. While the holiday is also known as Remembrance Day in other countries and celebrates the end of World War I, the name change in the United States reflects its emphasis on honoring military veterans.
The two objectives were mentioned in a speech on the first Armistice Day, November 11, 1919, by President Woodrow Wilson:

To us in America the reflections of Armistice Day will be filled with solemn pride in the heroism of those who died in the country’s service, and with gratitude for the victory, both because of the thing from which it has freed us and because of the opportunity it has given America to show her sympathy with peace and justice in the councils of nations.

You may also be interested in: On this day: Armistice Day