The Larry Qualls Archive of Contemporary Art surveys almost three decades of work exhibited in the New York area from 1988-2012. In this post, we consider the personalities and forces that dominated the art world in the 1980s. See also the 1990s and the 2000s.

Quall’s collection opens during the hurly-burly of the 1980s, the era of Reaganomics and Wall Street’s “greed is good,” and the rise of AIDS. It was also a time when the booming stock market transformed street artists into superstars.

Richard Serra’s “Tilted Arc” (1981) kicked off a decade when art was not so much an aesthetic as a statement. The 120-foot curve of steel bisected New York’s Federal Plaza as decidedly as it divided public sentiment.  During a heated public hearing, workers upset about restricted access opposed members of the arts community. The publicity cemented Serra’s reputation as a leading minimalist, but more importantly, it provoked a broader discussion on the nature of art. Similar debates ensued the following year when Maya Lin’s controversial Vietnam Veterans’ Memorial was installed in Washington D.C.’s National Mall. 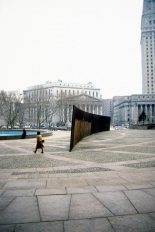 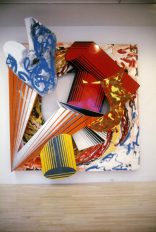 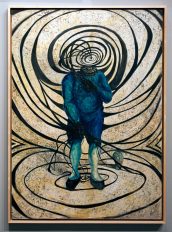 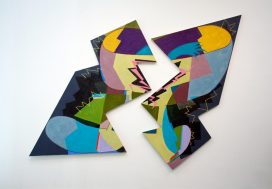 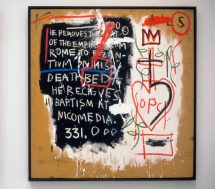 Driving the energy of this time was a sense of community in the neighborhoods, as well as the new money that was transforming them. SoHo was primarily an industrial zone before galleries like Sonnabend put the area on the international map. Their 1986 show, “Neo-Geo” (short for “Neo-Geometric Conceptualism”), featuring the artists Jeff Koons, Peter Halley, Ashley Bick­erton, and Meyer Vaisman, created a sensation. New York Magazine trumpeted “The Hot Four: Get Ready for the Next Art Stars” – prompting a bidding war.  Such was the frenzy, that “exhibitions at galleries were sometimes sold out even before the previews had taken place.” [1]

As the high rollers drove up SoHo’s rents, the more adventurous headed to the Lower East Side. “The East Village was an ideal refuge for any artist born without a silver spoon,” local denizen Gary Indiana recounted. [2] Here, a new breed of gallery owners redefined shows–any bare wall could be a viewing space. The entrepreneurial Gracie Mansion launched her first “gallery” in her bathroom with Stephen Lack’s quirky paintings. Peter Hujar, Marilyn Minter, Kiki Smith, David Wojnarowicz, and many others emerged from tiny spaces to become big names.

One of the more interesting developments was the exploitation of underground movements. Graffiti artists like “Zoo York” (who literally met in a tunnel below Central Park Zoo) had often been chased by police; now taggers were being hunted by the paparazzi. Venues like the FUN Gallery offered showings of Futura 2000, Kenny Scharf, and Lady Pink, artists whose canvases had been abandoned buildings. Long before they found fame, Jean-Michel Basquiat and Keith Haring had their first solo shows in this storefront space famous for its parties and lava-lamp cocktails.

The political activism of the decade also gave rise to identity politics, in which perspectives of specific social groups were represented in the arts. The Modern Art Museum of Fort Worth recently described the art scene in New York as “the loudest and most intense” of that period. Chief Curator Michael Auping also described the era as a turning point. “There was a very robust art market fueling the galleries. If you wonder why the art world is like it is today, refer to the ’80s,” he writes. “That’s where it began.”[3]