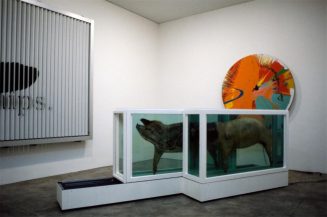 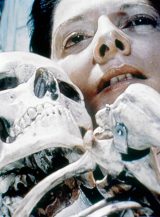 The Larry Qualls Archive of Contemporary Art surveys almost three decades of work exhibited in the New York area from 1988-2012. In this post, we consider the personalities and forces that dominated the art world in the 1990s. See also the 1980s and the 2000s.

As curator Gary Carrion-Murayari pointed out, the 1990s had a large influence on how we see art today.  “Some of the artists who were doing things that were shocking then, we take for granted now.”[1]

It was a turbulent time, as major institutions were upended. The fall of the Berlin Wall in 1989 was followed by the collapse of the Soviet Union. A stock market crash set off a recession keenly felt in the art market. New York gallery owner Mary Boone, named “The New Queen of the Art Scene” in the eighties, reflected on the downturn in 1992. “Value in everything is being questioned,” she said. “The psychology in the 80’s was excess; in the 90’s, it’s about conservation.”[2]

The losses didn’t end with economic woes. The AIDS epidemic took the lives of many leading New York artists, including Keith Haring and Robert Mapplethorpe. The latter was memorialized in “The Perfect Moment,” a show at Cincinnati’s Contemporary Arts Center, precipitating a new milestone: 1990 was the first time a U.S. museum was charged with obscenity. CAC’s attorney, a First Amendment defender, felt it was a fight for survival. “I’m absolutely convinced that if we lost that case in Cincinnati, the NEA would have been gone.”[3] 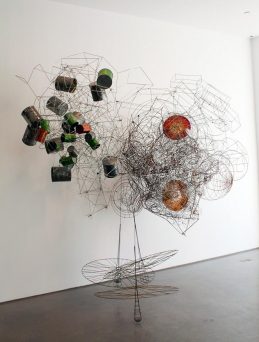 Judy Pfaff; Straw into Gold; 1990; exhibited at Ameringer McEnery Yohe, Fall 2010. Image and original data provided by Larry Qualls; Art © Judy Pfaff / Licensed by VAGA, New York, NY. This work of art is protected by copyright and/or related rights and may not be reproduced in any manner, except as permitted under the Artstor Digital Library Terms and Conditions of Use, without the prior express written authorization of VAGA, 350 Fifth Avenue, Suite 2820, New York, NY 10118. Tel.: 212-736-6666; Fax: 212-736-6767; Email: info@vagarights.com. 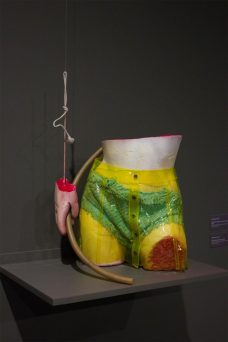 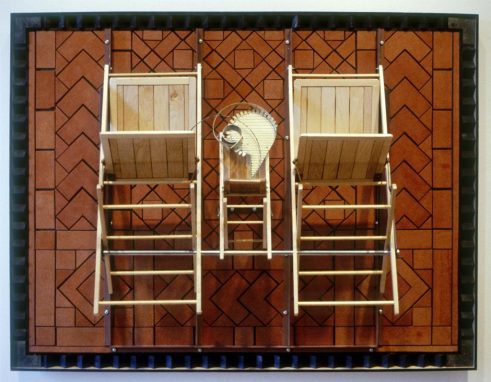 Art often functions as social critique, but the new transgressive art was out to shock. “Piss Christ,” a photograph from Andres Serrano’s Bodies of Work series, set off a furor and protests by the Catholic League (Christians later destroyed the work with hammers). Ironically, Serrano saw the piece as a reflection of his faith as well as his art, “The thing about the crucifix itself is that we treat it almost like a fashion accessory. When you see it, you’re not horrified by it at all, but what it represents is the crucifixion of a man.” [4]

Performance art, often provocative, also came under fire. While many of New York’s leading practitioners like Laurie Anderson, Spalding Gray, and Eric Bogosian became part of the mainstream, others such as Carolee Schneemann, Marina Abramović, and Karen Finley remained on the edge. After years as an outsider, Abramović is currently experiencing a renaissance – her 2010 MOMA performance was feted by pop culture stars like Lady Gaga and Jay-Z. Finley also had recent success, but in the nineties, she became part of the culture wars.

Members of Congress, incensed that the Mapplethorpe and Serrano shows received funding from the National Endowment for the Arts, cut the agency’s budget and lobbied for a “decency clause.” When Finley and three other controversial artists (“The NEA Four”) lost their grants, they filed a suit that prompted a national discussion. The four eventually received restitution, but the Supreme Court decision had profound repercussions for future arts funding. Finley sees it as censorship, “’The eight Justices did not make a constitutional decision. They made a decision purely based on politics.”[5]

In 1999, politics erupted again when the blockbuster show “Sensation” arrived at the Brooklyn Museum of Art (BMA). The YBA’s, or Young British Artists from the Saatchi collection, seemed intent on provocation. Damien Hirst famously displayed a dead shark in formaldehyde, Marcus Harvey depicted a mass murderer, Mark Quinn’s sculpture was cast from his own blood, and Rachel Whiteread turned a room inside out. But the piece that made international headlines was Chris Ofili’s ”The Holy Virgin Mary,” which incorporated elephant dung and photographic cutouts of body parts. Mayor Rudy Giuliani was appalled, particularly as the BMA received municipal funds. He tried to shut down the museum, arguing that “the city shouldn’t have to pay for sick stuff.”[6]

Eventually, the City agreed to restore funding and to halt eviction proceedings, but public debate on the role of art seemed an appropriate ending to this contentious decade.