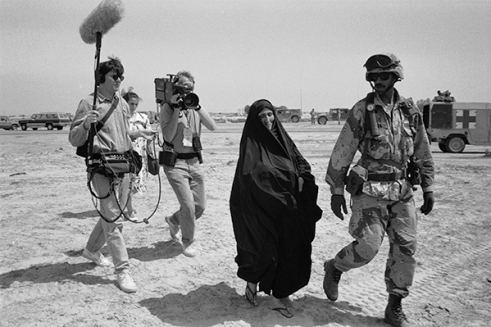 Magnum Photos and Artstor are now sharing more than 35,000 additional images in the Digital Library, bringing our total to approximately 116,000* of the world’s most recognized photographs. The new release spans the globe from Alaska to the Amazon and Oman to the Arctic Circle.

Among the highlights are black and white shots of daily life in Europe by Raymond Depardon; Middle Eastern tensions and traditions observed by Abbas; elegant staged portraits from Marilyn to Einstein by Philippe Halsman; Martine Franck’s images of both ordinary people and luminaries; a vibrant sequence in India by Alessandra Sanguinetti; and Thomas Hoepker’s striking painterly landscapes. The collection also documents present-day concerns with photographs from geopolitical hotspots like Fukushima, Donetsk, and Aleppo. 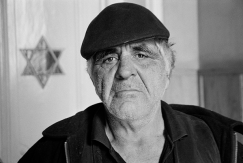 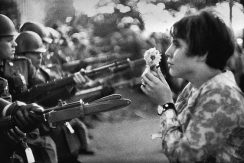 Matt Murphy, Magnum’s Archives and Production Manager, identifies some of the most enduring images from our earlier releases: “Student researchers would certainly find some of the subject matter familiar: Robert Capa’s blurry D-Day series, Dennis Stock’s image of James Dean in a rainy Times Square, Marc Riboud’s photo of a hippie woman presenting a flower to rifle-armed National Guardsmen, Stuart Franklin’s Tank Man in Tiananmen Square, and Steve McCurry’s haunting portrait of the green-eyed Afghan Girl. But, these and other iconic photos are only the tip of the vast visual iceberg that constitutes the Magnum archive.”

For seven decades, Magnum’s documentary photographers have been recording events, people, and phenomena from the Spanish Civil War to Vietnam to the present day. They have produced some of the most challenging images of the 20th century and contemporary life: depicting societies, celebrities, industry, landscapes, politics, disasters, and conflict. Magnum’s roster includes dozens of prominent names like Henri Cartier-Bresson, Robert Capa, Eve Arnold, Rene Burri, Elliott Erwitt, Josef Koudelka, Hiroji Kubota, Susan Meiselas, Martin Parr, Alex Webb, whose award-winning work has appeared in publications such as Life, Paris Match, and Picture Post, and is included in museums worldwide. Magnum Photos International, Inc. was founded as a co-operative in 1947 by Capa, Cartier-Bresson, George Rodger, and David “Chim” Seymour. They were motivated by what they had seen during World War II and a desire to explore the world that had survived in its aftermath. Cartier-Bresson described Magnum as “a community of thought, a shared human quality, a curiosity about what is going on in the world, a respect for what is going on and a desire to transcribe it visually.” The founders sought to preserve the independence of individual photographers and their creative visions, establishing a cooperative that allowed them to work outside the conventions of magazine journalism. Not only is Magnum owned by its member-photographers but they also retain copyright to their work. Over the decades, this autonomy has enabled them to build an outstanding body of collective work, representing the pinnacle of the photojournalist’s craft.

This collection provides an indispensable resource for Photography as well as Interdisciplinary Studies, supporting research in History, Literature, Urbanism, the Environment and Sustainability, Human Geography, Identity Studies, and other areas impacted by human endeavor or natural forces. It is one of four collections that we are publishing this spring on the theme of photography. Panos Pictures, the Center for Creative Photography, and Condé Nast complete the launch.