The Colonial Williamsburg Foundation has contributed approximately 500 additional images of works from their collections to the Artstor Digital Library, bringing the total selection to approximately 1,000.

The collection in Artstor provides a broad range from the Foundation, including Colonial painting, primarily portraits; American folk art; decorative arts, from furniture to silver; and textiles and costumes, notably quilts. Among the many highlights featured are a very early Two-handled bowl. c. 1696, made by Benjamin Wynkoop; a Double Chest of Drawers, 1775-1790, by Gideon Morgan; the anonymous Portrait of a Girl in a Garden, c. 1840; a Soup Tureen, 1800-1810, from Jingdezhen, China; and a Pair of Ice Skates, 1770-1820, from around the same period. The contemporary Pieced Quilt. c. 1970 by Susana Allen Hunte, and stoneware Lion, 2015, by Billy Ray Hussey exemplify traditional works that bring the collection to current times. 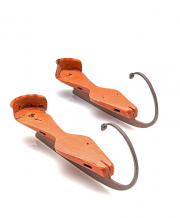 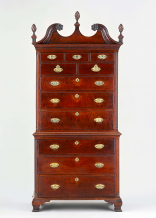 The Colonial Williamsburg Foundation operates the world’s largest living history museum in Williamsburg, Virginia—the restored 18th-century capital of Britain’s preeminent outpost in the New World—interpreting the cultural establishment of America in the years before and during the American Revolution. The story of Colonial Williamsburg’s Revolutionary City tells how diverse peoples evolved into a society that valued liberty and equality.

The collections offer an unparalleled research resource. The Foundation’s archaeological holdings in 18th-century British and American materials are unrivalled, while its archaeological environmental collections provide a window into plant and animal populations.

Learn more on the Colonial Williamsburg Foundation page in Artstor.

The Colonial Williamsburg Foundation collection in Artstor supports research and study in the fields of History and Art History and it is being released as part of a thematic launch on decorative arts and Americana which also includes selections from the following institutions: The Corning Museum of Glass, Majolica International Society, and Reynolda House Museum of American Art.