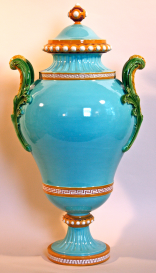 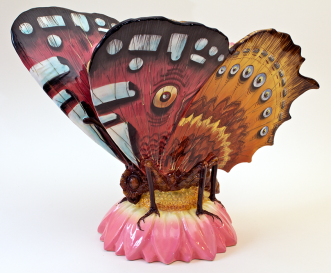 The Majolica International Society has contributed 1,000 images of Majolica pottery from the archival collections of its members to the Artstor Digital Library.

The Majolica International Society (MIS), founded in the 1980s by Michael Strawser, Joan Stacke Graham, and the late Dr. Marilyn Karmason, is a non-profit collectors’ and scholars’ group dedicated to the study and promotion of Victorian Majolica. The extensive selection from the MIS in Artstor provides a robust survey from the compact and elegant Wedgwood Dragon Tea Kettle, c. 1860s, to the monumental neo-classical Minton Urn, c. 1871. The characteristic whimsy and eclecticism of forms and motifs is captured in pieces like the Minton Monkey Garden Seat, 1866, the “Punch” Bowl by George Jones, c. 1870-1880, and Delphin Massier’s exquisite Monumental Butterfly Jardinière, 1850-1900.

The Society includes the Karmason Library (KL), which seeks to document every piece of authentic Majolica and offers an online database of more than 10,000 works–available to members and invited scholars. In addition, the MIS provides sustained support to the Joan Graham Majolica Lecture Series at the Bard Graduate Center (BGC). Further, the MIS is partnering with BGC and the Walters Art Museum in an international exhibition (2019-2020) to be accompanied by a newly researched volume on the history of Victorian Majolica.

Majolica gets its name from Renaissance Maiolica, but apart from their low-fired bodies, the two art forms have little in common. Confusingly, when Herbert Minton introduced his new line of ceramics (today known as “Majolica”) to the public in 1851, he used the terms “Maiolica” and “Palissy” interchangeably, before settling on “Majolica.” The question of differentiating Maiolica/Majolica has spurred much debate among scholars, leading to the major research project currently underway, which is the origin of the Bard and Walters Exhibition.

Victorian Majolica is a sculptural form of ceramic “useful wares.” Its components are generally mold-made, and the raised elements become an integral part of the bisque body, which is covered in large areas of brilliant lead glazes. Maiolica, on the other hand, is most often on a flat surface with delicate designs painted onto a white tin dry glaze. Occasionally, both techniques appear on a single object.

Learn more on the Majolica International Society page in Artstor.

The collection from the Majolica Society is being released as part of a thematic launch on decorative arts and Americana which also includes selections from the following institutions: The Corning Museum of Glass, Reynolda House Museum of American Art, and the Colonial Williamsburg Foundation.