Alka Patel and the University of California, Irvine have contributed approximately 5,000 images of the art and architecture of historic Islamic sites in Afghanistan and Iran to the Artstor Digital Library.

The collection in Artstor is made up of Patel’s field photography, with an emphasis on mosque architecture, and it includes extensive and uncommon coverage of the monuments of the Ghurid Dynasty (c. 1149-1215). For example, the Great Mosque (Jami Masjid) of Herat begun under a Ghurid Sultan in 1200 CE is featured in dozens of images from the expansive panorama down to details of exquisite mosaic work. Patel also documents the evolution of the Great Mosque at Isfahan, over the course of centuries under Buyid, Seljuk, and Safavid rule in photographs that capture the scope of the structures as well as the most intricate detail. Her work also records many other significant Islamic sites, including monumental tombs as well as some of the extraordinary feats of engineering and craftsmanship exhibited in structures such as the tower at Toghril mausoleum, 1139-1140, and the Khusraugerd Minaret, 12th CE. 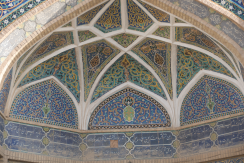 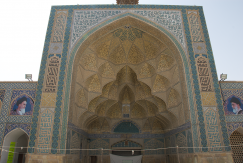 Alka Patel is Associate Professor in the Department of Art History and in the PhD Program for Visual Studies at the University of California, Irvine. She received her PhD from Harvard University. Patel’s research has focused on South Asia and its connections with Iran and Central Asia. She has also maintained an ongoing interest in the Islamic history of the Maghrib (Iberia and North Africa) and Islamicate diasporas in the New World, notably Cuba.

Dr. Patel’s publications include Building Communities in Gujarat: Architecture and Society during the Twelfth-Fourteenth Centuries (Brill 2004), and Communities and Commodities: Western India and the Indian Ocean, for which she was guest editor of a special issue of Ars Orientalis XXXIV (2004). Patel also guest-edited Archives of Asian Art LIX (2007), on reuse in South Asian visual culture. Her interests include mercantile networks and architectural patronage in modern South Asia, as evidenced in Indo-Muslim Cultures in Transition (co-ed. K. Leonard, Brill 2012). Her recent volume India and Iran in the Longue Durée (Jordan Center for Persian Studies, 2017), co-edited with ancient Iranist Touraj Daryaee, resulted from a conference of specialists analyzing Indo-Iranian connections over two millennia. Patel’s current book project on the Ghurids of Afghanistan and northern India is titled India, Iran and Empire: the Shansabānīs of Ghūr, ca. 1150-1215, underway with the support of the Getty Consortium Scholar Fellowship (2017-18).

Alka Patel Archive: Afghanistan and Iran, Art and Architecture is being released as part of a thematic launch on world architecture which also includes the following collections: Misun Ahn: Contemporary Architecture, South Korea and Japan; Ralph Lieberman: Architectural Photography; and Restoration of Cultural Monuments in Oaxaca, Mexico: School of Architecture (The University of Texas at Austin).