A brief history of Majolica “Majolica” is the word used to denote the brightly colored, low-fired earthenware commercially introduced by the Minton Company at the 1851 London Exhibition of All Nations. This was in accordance with Herbert Minton’s long-held desire to capture the market of the newly emergent Middle Class. Majolica, a Victorian phenomenon, was a huge success at the Crystal Palace and soon became a worldwide fad, with factories on three continents and Australia to satisfy the buying craze it had inspired. Deborah English, Librarian, The Marilyn Karmason Majolica Reference Library of the Majolica International Society (MIS), has provided a history of the wares to celebrate the addition of the MIS collection to the Artstor Digital Library.

Staffordshire potters first developed lead glazes of green and brown in the 18th Century, but it was not until Herbert Minton of Stoke-on-Trent brought the French chemist Leon Arnoux to England, that more vibrant colors began to appear. This was possible, thanks to Mr. Arnoux’s previous work with the sumptuous porcelain glazes of Sèvres. Mr. Arnoux also persuaded several prominent French sculptors to join him at Minton, including A.E. Carrier-Belleuse, Paul Comolera, and Pierre Emile Jeannest. They joined the already formidable staff that Mr. Minton had built, including Alfred Lord Stevens, Baron Carlo Marochetti, John Bell, A.W.N. Pugin, and others. Mr. Minton formally introduced his new ware at the Crystal Palace Exhibition in 1851, even though English potters and English-born potters in the USA had been working on the formulas for some time. Arnoux’s saturated colors were the radical boost the new material needed. It soon happened that an astonishing number of forms evolved, sometimes in bizarre combinations.

Majolica producers intended to capture the interest and the market of the emerging middle class. The resulting pottery invokes the scientific and social advances of the Victorian era. Victorians delighted in the classical stories of antiquity, creatures imagined and real, exotic peoples and animals, and specimens of Natural History. All these subjects were brought to them from the breadth of the British Empire. 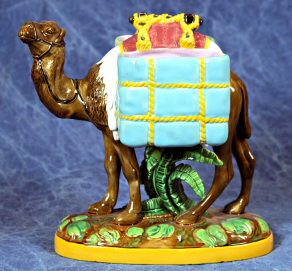 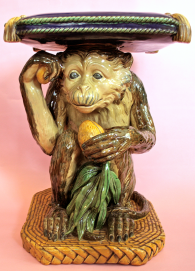 Many objects were designed to be “fit for purpose.” A box to hold sardines would have that small fish as its finial. There is much humor in Majolica as this method of representation is employed, and visual puns abound.

Another individuating aspect of Majolica is its audacity of scale. Garden ornaments include 40” high pedestals with enormous companion jardinières, life-sized humans, tigers and herons and peacocks. There are many themes occurring in Majolica, including antiquities, natural history (botany and zoology), and the exotic. Agrarian nostalgia and bounty/thankfulness both reflect a society still devoted to its moral principles; while current events and social commentary also appear, especially in the work of the French potters. Minton Majolica was a sensation at the 1851 Exhibition. Wedgwood began making Majolica ten years later, when Minton’s patent expired. By then, Majolica had become a worldwide phenomenon, with hundreds of factories all over Europe, the United States, and Australia. Much of this production was derivative of English design, but not all. The European countries in particular developed styles that were best suited to their national temperaments.

However, by the turn of the 20th century, Majolica’s popularity had faded. A decline in production values had occurred, as lesser factories began to make inferior wares. Furthermore, Modernism’s precursors were beginning to attract attention. Finally, lead glazes were eased out of use as that mineral’s lethality became more apparent. Majolica’s bright flame had burned itself out. The year of Queen Victoria’s death, 1901, is considered an end date.

Authentic, lead-based Majolica was made well into the 20th century. Yet these designs were either from the earlier period, or demonstrated a distinct 20th century change of taste.

Today, Reproduction Majolica is still popular, and some of the original ideas are in use, but the brilliant lead glazes are gone. What remains is an affectionate nostalgia for the grand ideas of the Victorian era.