Now available: highlights from the collection of The Morgan Library & Museum Paul Cézanne. Still Life with Pears and Apples, Covered Blue Jar, and a Bottle of Wine. 19th century. Watercolor on wove paper. Image and data provided by The Morgan Library and Museum.

The Morgan Library & Museum (The Morgan) has contributed approximately 200 images from its permanent collection to the Artstor Digital Library. The selection provides a range of highlights from The Morgan’s European drawings collection from the Renaissance to the 20th century, featuring celebrated works from Albrecht Dürer through Francisco Goya and Paul Cézanne.

The selection features many of the most recognized and beloved works from The Morgan, and the list of artists reads like a who’s who of the European schools from the 15th to the 20th centuries: portraiture from Lucas Cranach to Jean-Auguste-Dominique Ingres and Egon Schiele; landscapes by Rembrandt, J.M.W. Turner, François Boucher, and Caspar David Friedrich; and animal renderings from Jacob Hoefnagel and Eugène Delacroix, notably his Royal Tiger, c. 1830, are among many other iconic works. A comparison of Francisco Goya’s socially trenchant Leave it all to Providence (Dejalo todo a la probidencia), 1816, and Rembrandt’s touching and intimate Woman with a Child, c. 1636, contrasting interpretations of outwardly similar subjects, demonstrates both the depth of the collection and the expressive potential and variability of works on paper. 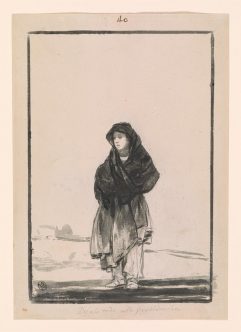 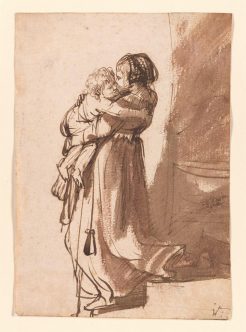 Rembrandt Harmenszoon van Rijn. Woman with a Child Descending a Staircase. ca. 1636. Pen and brown ink on paper. Image and data provided by The Morgan Library and Museum. 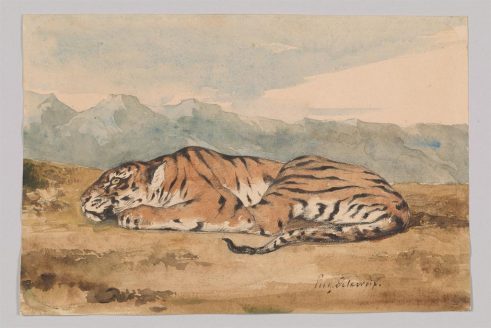 The Morgan Library & Museum began as the private library of financier Pierpont Morgan (1837–1913), the pioneering collector of America’s Gilded Age. In addition to being a bibliophile, Morgan’s collecting tastes and activities ranged from Egyptian art through Renaissance paintings and Chinese porcelains, and included some of first great masterworks to come to the United States. For his library, Morgan acquired illuminated, literary, and historical manuscripts, early printed books, and old master drawings and prints. To this core collection he added the earliest evidence of writing as manifested in ancient seals, tablets, and papyrus fragments from Egypt and the Near East. Morgan also collected manuscripts and printed materials significant to American history.

In 1924, his son, J. P. Morgan, Jr. (1867–1943) fulfilled his father’s dream of making the library and its treasures available to scholars and the public alike by transforming it into a public institution. The original library—the core of Morgan’s Senior’s fashionable McKim, Mead & White-designed Manhattan home—has accrued an annex and subsequent additions over the past near-century of the museum’s history, most recently with the integration and expansion by Renzo Piano.

Over the years, through purchases and generous gifts, The Morgan has continued to acquire rare materials, important music manuscripts, and a fine collection of early children’s books and manuscripts. Nevertheless, the focus on the written word, the history of the book, and master drawings has been maintained.

The selection from The Morgan Museum & Library is part of a thematic launch of New York-based collections that also includes the following contributors: the New-York Historical Society; the Museum of the City of New York, and the Solomon R. Guggenheim Foundation.

View the collection in the Artstor Digital Library, or learn more at the Morgan Library & Museum collection page.