The Solomon R. Guggenheim Foundation is contributing approximately 850 additional images from the permanent collections of four of its museums to the Artstor Digital Library, bringing their total to nearly 8,000.*

This latest contribution features a wide-ranging selection from the Solomon R. Guggenheim Museum in New York, the Peggy Guggenheim Collection in Venice, the Deutsche Guggenheim in Berlin, and the Guggenheim Bilbao. Post-Impressionists such as Seurat, Cézanne, and Gauguin number amongst the historic selections, with modern masters Braque, Duchamp, Man Ray and Kandinsky rounding out the 20th century. Heading into the 21st century, video art from Ann Hamilton, Bill Viola, and Pierre Huyghe feature heavily, while photographs by Robert Mapplethorpe, Ana Mendieta, and Cindy Sherman provide iconic contemporary coverage. 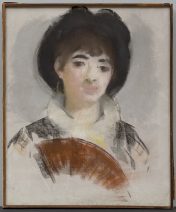 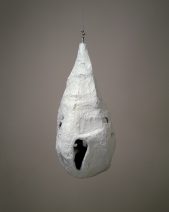 Louise Bourgeois. Fée Couturière. 1963 (cast 1984). Painted bronze. Art © Louise Bourgeois Trust / Licensed by VAGA, New York, NY. This work of art is protected by copyright and/or related rights and may not be reproduced in any manner, except as permitted under the ARTstor Digital Library Terms and Conditions of Use, without the prior express written authorization of VAGA, Tel.: 212-736-6666; Fax: 212-736-6767, email: info@vagarights.com. © The Solomon R. Guggenheim Foundation, New York.

Hannah Wilke. S.O.S. Starification Object Series (Back). 1974. Gelatin silver print. © Marsie, Emanuelle, Damon and Andrew Scharlatt/Licensed by VAGA, New York, NY. This work of art is protected by copyright and/or related rights and may not be reproduced in any manner, except as permitted under the ARTstor Digital Library Terms and Conditions. © The Solomon R. Guggenheim Foundation, New York.

Since its inception in 1939, the Solomon R. Guggenheim Museum, first named the Museum of Non-Objective Art, has been a leader in collecting modern and contemporary art. Its eponymous founder was a pioneer collector of contemporary art who began in the late 1920s, amassing about 600 works by groundbreaking artists like Wassily Kandinsky, Paul Klee, Marc Chagall, Rudolf Bauer, Robert Delaunay, and László Moholy-Nagy that formed the founding collection of the New York museum. The global Guggenheim network that began in the 1970s when the Museum in New York was joined by the Peggy Guggenheim Collection in Venice has expanded to include several other museums, notably the Guggenheim Bilbao. Each constituent museum unites distinguished architecture with great artworks, a tradition that has become a Guggenheim hallmark. The Museum in New York, designed by Frank Lloyd Wright, is home to an outstanding collection of Impressionist, Post-Impressionist, early modern, and contemporary art, while the Peggy Guggenheim Collection in Venice houses one of the most important selections of early 20th-century European and American art in Italy. The Guggenheim Bilbao, designed by Frank Gehry, features a permanent collection that spans from the mid-20th century to the present day, concentrating on post-war painting and sculpture in America and Europe.

The selection from the Solomon R. Guggenheim Foundation is part of a thematic launch of New York-based collections which also includes the following contributors: the New-York Historical Society; the Museum of the City of New York, and The Morgan Library & Museum.

View the collection in the Artstor Digital Library, or learn more at the Solomon R. Guggenheim Foundation collection page.