Now available: additional images from the Museum of the City of New York Edmund V. Gillon, photographer. Looking south on South Street to the Manhattan and Brooklyn Bridges and the Lower Manhattan skyline, c. 1977. Image and data provided by Museum of the City of New York.

The Museum of the City of New York has contributed approximately 17,300 additional images from its permanent collection to the Artstor Digital Library, bringing their total to more than 71,000.*

The images have been selected from the Museum’s Prints and Photographs Collection, which documents the built environment of New York City, its changing cultural, political, and social landscape from its early days to the present, providing a comprehensive visual record of the history of the city.

The selection is made up entirely of photographs, primarily architectural, and it also includes a significant collection of theatrical photography. The firm of Lucas-Pritchard (later Lucas-Monroe) captured hundreds of stage productions in New York from 1936 to the mid-50s, including shots of luminaries like Paul Robeson, Eartha Kitt, and Orson Welles, all available in the current contribution. New York’s landmarks from the turn of the last century through the 1960s are recorded in thousands of photographs, as well as ground plans and architectural renderings from the Wurts Brothers Company, a firm that was commissioned by architects, developers, and contractors to document the emerging buildings and skyline of the city. Most of the Wurts Brothers images, which include interiors, may be construed as formal, staged portraits of buildings and sites, West 34th and 5th, 1931, in addition to records of construction, Pennsylvania Station, 1908, and even the occasional unexpected view of the life of the city, New York World’s Fair, giraffe, c. 1938. 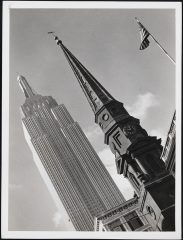 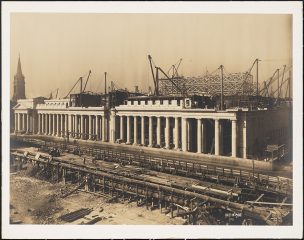 Wurts Bros., photographer. Construction of Pennsylvania Station, 1908. Image and data provided by Museum of the City of New York. 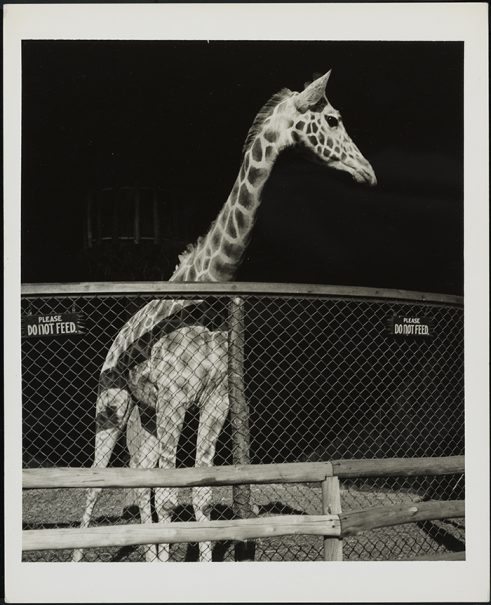 By contrast, the contributed photographs of Edmund Gillon who chronicled New York City in several books, present landmarks within a more integrated urban fabric: buildings, bridges, monuments, parks, in both expansive views and focused details as in his Statue of W. H. Seward facing the Flatiron Building, c. 1979, and his Looking South on South Street, 1977. Further, his lense probed neighborhoods at a more intimate level, as in his Looking through a Window, c. 1975. 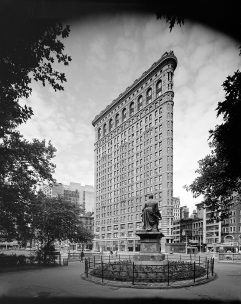 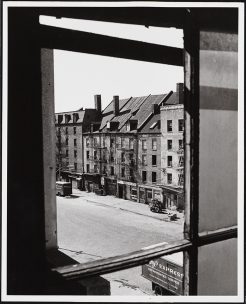 Edmund V. Gillon, photographer. Looking southeast through a window toward Schermerhorn Row, c. 1975. Image and data provided by Museum of the City of New York.

This selection from the Museum complements the holdings already in Artstor consisting largely of the archives of noted photographers Berenice Abbott (1898-1991), Jessie Tarbox Beals (1870-1942), Andreas Feininger (1906-1999), Jacob Riis (1849-1914), and Carl Van Vechten (1880-1964). The work of amateur photographers is also featured—Robert Bracklow, Arthur D. Chapman, Alta Ruth Hahn, Roy Perry, and others, who captured the daily life and architecture of specific neighborhoods. The output of professional studios—Beals, van Vechten, and Ernest Walter Histed (1862-1947)—specializing in portraiture of notable figures, is also available. In addition, important archives from commercial firms document a wide range of subjects. The Byron Company collection records life in the city between 1890 and 1942. The Gottscho-Schleisner collection comprises architecture and interior design, recording evolving styles and trends of the 20th century.

The Museum of the City of New York celebrates the city, educating the public about its distinctive character, especially its diversity, opportunity, and perpetual transformation. Founded in 1923 as a private, nonprofit corporation, the Museum serves the people of New York and visitors from around the world through exhibitions, school and public programs, and publications, with a special emphasis on its outstanding photography collection.

The selection from the Museum of the City of New York is part of a thematic launch of New York-based collections which also includes the following contributors: the New-York Historical Society; The Morgan Library & Museum, and the Solomon R. Guggenheim Foundation.

View the collection in the Artstor Digital Library, or learn more at the Museum of the City of New York collection page.