Now Available: additional images from the Art Gallery of Ontario

The Art Gallery of Ontario (AGO) has contributed approximately 120 additional images of its diverse permanent collection to the Artstor Digital Library, bringing their total to over 600 images.*

While our first contribution from the AGO reflects the excellence of their European collections, featuring paintings, works on paper, and sculpture from the early Renaissance tempera paintings of Giovanni del Biondo to the minimal modernism of Constantin Brancusi’s sculpture, the present selection provides a history of Canadian painting from the 19th to the early 20th centuries.

The history of Canadian art is deeply tied to the land. British and European ex-patriate settlers and artists brought their tradition of landscape painting to the New World where, despite its promised bounty and magnificent ruggedness, the very landscape itself raised a formidable challenge to survival. The imposing Northern Head of Grand Manan, 1879, by Lucius Richard O’Brien (above), a scene from the Bay of Fundy, partakes of the luminism and heroics familiar from the landscapes of Britain’s Joseph Mallord William Turner and Albert Bierstadt of the United States. 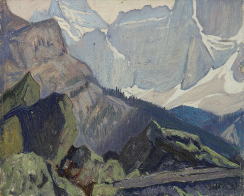 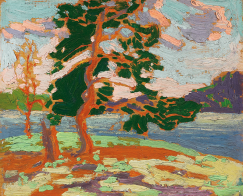 By the early 1920s, Canada’s most appreciated and recognized practitioners of landscape, the Group of Seven, had forged a particularly expressive style that veered from strict naturalism but nonetheless revered the national land. J.E.H. MacDonald, a founding member of the Group, is represented here by a small yet monumental sketch of Mount Biddle, 1930, where he has simplified and strengthened natural formations, tending toward abstraction. In Tom Thomson’s Pine Tree, c. 1919, also an oil study, the enhanced palette may reflect a fleeting effect, artifice, or both. 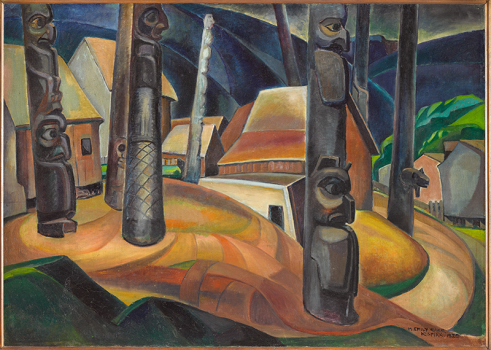 On the West Coast, an associate of the Group, Emily Carr merged the mysteries of the indigenous rainforest with the totem poles and constructions of First Nations’ Peoples, as in the expansive Kispiax Village, 1929. 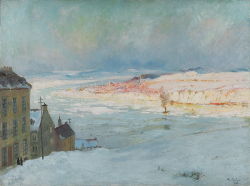 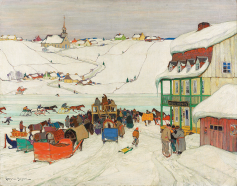 Canadian landscape painting cannot be considered without mention of the particularly northern subgenre—the winterscape. Much as the Inuit have dozens of words for snow, Canadian painters have depicted it in infinite variations, as in Maurice Cullen’s Lévis from Quebec, 1906, and Clarence Alphonse Gagnon’s Horse Racing in Winter, c. 1925.

The AGO holds nearly 95,000 works in a collection that reaches from 100 C.E. to the present. The collection vividly documents the development of Canada’s art heritage, with drawings and paintings from the Group of Seven, as well as works from First Nations, Métis, and Inuit peoples. It also includes significant European art from the 12th to the 19th century; contemporary art from 1960 to the present; more than 40,000 photographs from the 19th century on; the world’s largest public collection of works by British sculptor Henry Moore; and a decorative arts collection of international importance. Thanks to Artstor’s agreement with SODRAC, the principal society for reproduction rights in Canada, works by many contemporary artists in the AGO’s Collection are included in the release.

Founded in 1900 by a group of private citizens as the Art Museum of Toronto, the Art Gallery of Ontario is one of the largest art museums in North America, with a physical facility of nearly 600,000 square feet. The AGO expanded in 2008 with an innovative design by the leading museum architect Frank Gehry.

View the collection in the Artstor Digital Library, or learn more at the Art Gallery of Ontario collection page.