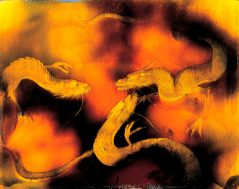 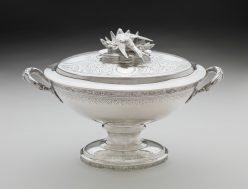 The Cincinnati Art Museum has contributed approximately 1,000 images from its inclusive permanent collection to the Artstor Digital Library.* The selection in Artstor provides a survey across many curatorial areas with an emphasis on European and American paintings and sculpture, Asian paintings and ceramics, decorative arts (notably American), and fashion.

While many of the images from Cincinnati in the Artstor Digital Library support its reputation as a repository of global art, the current contribution is distinguished by the fine work that was produced by local artists and craftsmen. The Rookwood Pottery Company, established in 1880 and still in production, is featured here in a striking plaque, Trinity of Dragons designed c. 1892 by the Japanese/American artist Kitaro Shirayamadani. A silver tureen, 1870s, from the same period, highlights the museum’s holdings from Duhme & Co., Cincinnati’s premier silver firm, active 1843-1893. 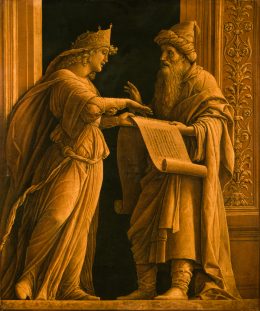 Andrea Mantegna. A Sibyl and a Prophet. c. 1495. Distemper and gold on canvas. Image and original data courtesy of Cincinnati Art Museum.

The European paintings department is highlit by the likes of Sandro Botticelli’s Judith, c. 1469-1470, and Andrea Mantegna’s A Sibyl and a Prophet, c. 1495, diminutive and precious testaments to the brilliance of the artists. At the opposite end of the scale and the aesthetic and temporal spectrum is an expansive Mural, 1947 by Joan Miró, 30 feet in length, originally commissioned for the restaurant of a Cincinnati hotel. The museum is also rich in American paintings, with many available through Artstor.

The museum’s Asian and Native American holdings also figure prominently in our current selection. From the esteemed Japanese Kano School, a six-part folding screen entitled Scholars in a Garden, c. 1633-1700, honors a traditional subject and landscape against a characteristic gold ground. A juxtaposition of a Chinese Jar, 15th century, exemplifying the iconic and enduring blue and white ware, with a Zuni water jar, c. 1880, produced by the Pueblo people of New Mexico—ceramic vessels of roughly the same size and proportion—stimulates a comparison of outwardly similar objects created worlds, centuries, and cultures apart. 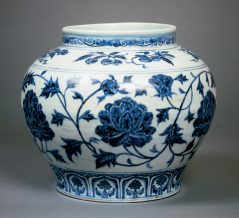 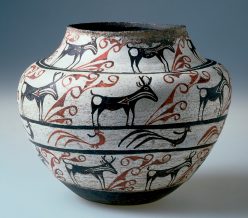 With a permanent collection of more than 67,000 works with a global reach and encompassing six millennia, the Cincinnati Museum features the art of Egypt, Greece, and Rome, as well as Asia, Africa, the Americas, and Europe, fashion and textiles, photographs, decorative arts and design, and contemporary art.

In 1881, the Cincinnati Museum Association was incorporated by local citizens. Five years later, the first home of the museum, designed by James W. McLaughlin, was completed in Eden Park and was heralded as “The Art Palace of the West.” While the original structure remains as the main monumental entrance to the Museum, expansions and restorations have greatly increased the capacity of the galleries, the library and the administrative facilities. Thanks to the support of The Lois and Richard Rosenthal Foundation the museum is able to offer free admission in perpetuity.

View the collection in the Artstor Digital Library, or learn more at the Cincinnati Art Museum collection page.