Now Available: 4,300 additional images from the Philadelphia Museum of Art The Philadelphia Museum of Art has contributed approximately 4,300 additional images of its encyclopedic and exceptional permanent collection to the Artstor Digital Library bringing its total to more than 7,500.* The current contribution centers on the museum’s comprehensive Chinese collections.

The museum’s Chinese holdings include several thousand works of art and objects, and the selection in Artstor presents a rich cross-section that highlights varied techniques and materials from prehistory through the 19th century. Skill and refinement are visible in objects as disparate as a prehistoric jade ax head and an elaborately painted and ivory encrusted twelve-panel silk screen, late 18th-early 19th century. 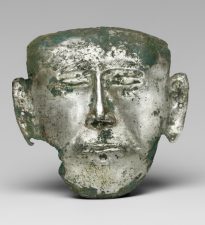 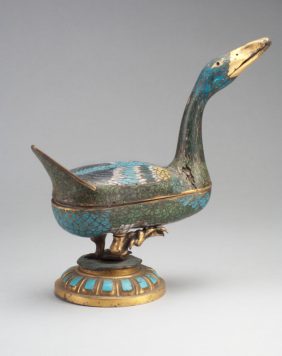 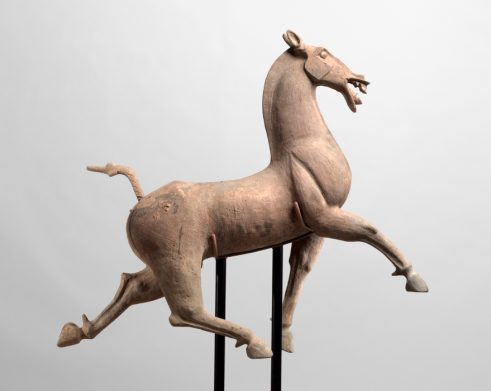 A distinctive and fragile funerary mask, late 10th-early 12th century, finds an equally delicate yet differentiated counterpart in an eggshell-thin blue underglaze bowl, c. 1400-1433, from the famous porcelain works of Jingdezhen. A prancing earthenware Han Horse, c. 25-220, is proudly and perfectly equine while a diminutive cloisonné duck steps and cranes in his mantle of brilliant enameled plumage. 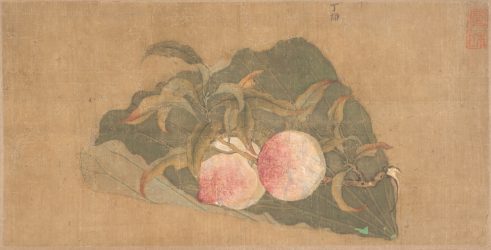 Paintings are as varied as the traditional Qing dynasty Peaches on Lotus Leaf, c. 1644-1911, and the meticulously penned House Boat, made for the export market during the same period (above).

The Philadelphia Museum of Art houses more than 240,000 objects that represent international cultures from antiquity to present times. The Asian collections include diverse works and reconstructed architectural spaces such as a Japanese teahouse and halls from a Chinese palace and an Indian temple. The European collections date from the medieval era to the present, with many iconic works and notable Impressionist and Post-Impressionist paintings, including Paul Cézanne’s The Large Bathers, Vincent van Gogh’s Sunflowers, as well as the finest public collection of Auguste Rodin’s sculpture in North America (The museum administers the Rodin Museum, which is located across the street from the main building). An exceptional collection of American art completes the Western holdings. The museum’s trove of modern and contemporary art includes the work of Pablo Picasso, Marcel Duchamp, Constantin Brancusi, Cy Twombly, Jasper Johns, Sol Lewitt, and countless others.

The museum was chartered in 1876 and it opened the following year. In 1928, architect Horace Trumbauer’s new Greek-Revival building on Fairmont Park opened its doors. Under the direction of Frank Gehry, the museum plans to enlarge and modernize its current space while maintaining its Neoclassical exterior. The campus is completed by the newly renovated Art Deco Perelman Building and two eighteenth-century houses in Fairmount Park, Mount Pleasant and Cedar Grove.

The Philadelphia Museum of Art collection is being released as part of a thematic launch on major North American museums that includes selections from the Art Gallery of Ontario; the Art Institute of Chicago; the Cincinnati Art Museum; the Museo de Arte de Ponce; the Museum of Fine Arts, Boston; The Museum of Fine Art, Houston; the Norton Simon Museum; and the Seattle Art Museum.

View the collection in the Artstor Digital Library, or learn more at the Philadelphia Museum of Art collection page.