The Tufts University Art Gallery has contributed 88 images of its permanent collection to the Artstor Digital Library.* The selection in Artstor accentuates the museum’s American holdings, predominantly paintings and works on paper from the nineteenth century through to the present.

The current contribution chronicles the development of the Gallery’s collection beginning in the nineteenth century—when emphasis was placed on documenting distinguished faculty and associates, and acquiring the work of local artists—to today’s role as a vital presence in the contemporary art scene around Boston. A luminous beach scene of 1876 by the plein-air marine painter William Edward Norton attests to his then very modern aspiration to finish pictures outdoors rather than in the studio—note the detail of the artist working beneath the umbrella (above). 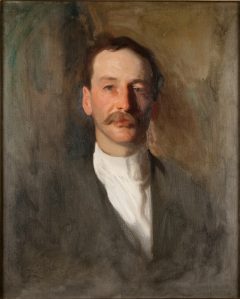 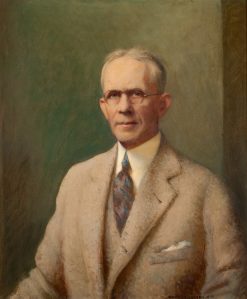 Two portraits highlight distinguished faculty: John Singer Sargent’s rendering of Dr. Morton Prince, c. 1895, and Charles Courtney Curran’s Portrait of Herbert Vincent Neal, 1940. Prince (1854-1929) was a neurologist who pioneered the use of hypnosis in his practice and is most recognized for his study of multiple personality disorder. Neal (1869-1940) was a biologist who contributed to the field of comparative anatomy. 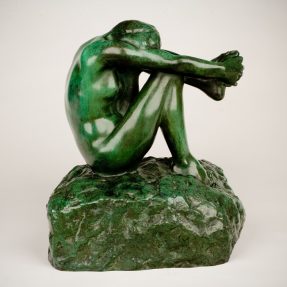 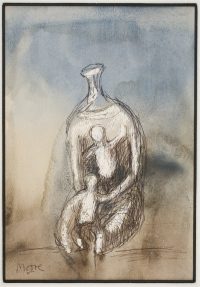 As the mission of the gallery grew, sculpture figured in the mandate. Désespoir (Despair),1893 (cast in 1902) by Auguste Rodin was a gift of 1967, while the watercolor Seated Mother with Twins, 1981, a sketch by Henry Moore related to a theme in his bronzes, was acquired in 1983. The recent commission and installation on campus of the Colossal AcornHead, a five-foot-long bronze by the artist Leslie Fry, demonstrates a strong commitment to public and contemporary sculpture. 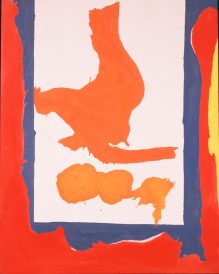 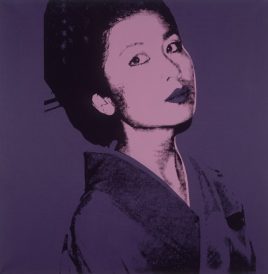 The art collection was established at Tufts University in the in the mid-nineteenth century with early acquisitions that reflected the history of the college. Today, the collection is comprised of approximately 2,000 works spanning ancient Mediterranean and pre-Hispanic cultures, modern and contemporary painting and sculpture, and photography. It features paintings by artists from the nineteenth century to the present such as Emile Bernard, Elaine De Kooning, Grace Hartigan, John Frederick Kensett, Gyorgy Kepes, Alice Neel, and John Singer Sargent. Modern and contemporary sculptures by Dimitri Hadzi, Richard Hunt, Louise Nevelson, Isamu Noguchi, Auguste Rodin, and Frank Stella, among others, are sited across the main campus.

Since 1991, the gallery has been located in the Shirley and Alex Aidekman Arts Center on the main Tufts campus in Medford. It contributes to the vibrant contemporary art scene in the Boston metropolitan area and functions as an unparalleled campus resource for fostering visual literacy and critical thinking skills.

View the collection in the Artstor Digital Library, or learn more at the Tufts University Art Gallery collection page.