Paradises on earth: the sublime architecture of the Indo-Islamic empires The American Institute of Indian Studies (AIIS) has contributed an additional 5,094 images to the Artstor Digital Library, bringing their total to more than 69,000.*

The current selection in Artstor provides a survey of Indo-Islamic architecture in India from the time of the successive Sultanates of Delhi (~ 1200-1525) through the long rule of the dominant Mughal Dynasty (1526-1857). While the signature buildings of the Mughals may be familiar—the Red Fort at Agra and the Taj Mahal—this material provides striking documentation of many monuments that are generally known only to a specialist audience. The material focuses on the structures and projects patronized by emperors, sultans, and their officials: mosques, tombs/mausolea, palaces, forts, and the refined gardens that surrounded them. 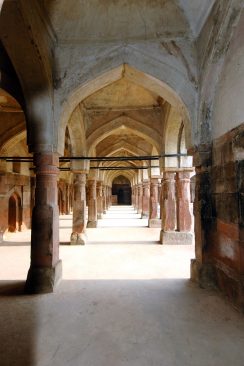 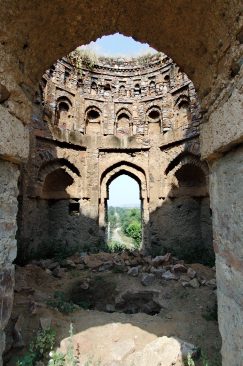 A 14th-century colonnade from the remains of the mosque at Firuzabad (in present-day New Delhi), contained in the citadel of Firuz Shah, an ambitious builder of the Tughluk dynasty, features the pointed Islamic arch that dominates designs, while a ruined tomb structure 1475-1525, from the Lal Gumbad complex (also New Delhi) built under Lodi rulers (1451-1525), denotes the importance of the mausoleum structure. 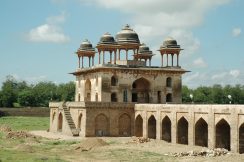 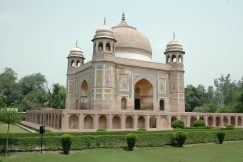 The Jal Mahal (water palace, near Chandigarh), 1590-1593, set in an engineered pool, is both a feat of design and hydraulics with a 16-span bridge connecting the palace to the gardens. It was constructed for a local governor during the reign of the early Mughal Emperor Akbar and it offers an example of the importance of the element of water in Indo-Islamic built environments. The Tomb of Haji Jamal, 1656-1657 (in the city of Jalandhar), begun a decade after the completion of the Taj Mahal, reflects its purpose, form, and decorative detail. It is one of a pair of tombs, those of Ustad (teacher) and Shagird (disciple) set in a garden complex. 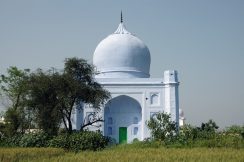 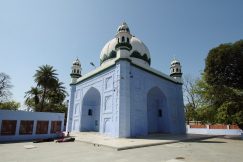 Later tombs, c. 1668-1702, from the Rauza Sharif complex (city of Sirhind) are distinguished by a finish of painted stucco. They are just two elements of a comprehensive site that was founded on the grave of the revered 17th-century religious reformer Mujaddid Alif Sani.

A discussion of Indo-Islamic architecture would not be complete without an introduction to the concept of the garden (bagh). The Pinjore Gardens (above) 1658-1707, (known today as Yadavindra) are set in the foothills of the Himalayas near Chandigarh and they were built for the Mughal Emperor Aurangzeb as an idyllic respite, replete with cooling water channels. They embody the Islamic concept of garden as Paradise—patterns of water, light, walkways, foliage and flowers orchestrated by the geometer, the architect, and the engineer.

The images from the AIIS collection in Artstor have been taken from their photo archive, which is housed in the Center for Art and Archaeology in Gurgaon, Haryana, India, consisting of more than 200,000 photographs, slides, architectural drawings, and site plans. Subjects include works in diverse media, as well as Buddhist, Jain, Hindu, and Islamic architecture. These images document the scope of South Asian visual traditions, including thousands of sites, as well as museum collections. A significant portion of the archive is available online through the Digital South Asia Library.

The AIIS is a consortium of universities and colleges in the United States devoted to teaching and research on India. Since 1961, the AIIS has provided support to thousands of scholars and creative artists, resulting in publications in disciplines ranging from anthropology to zoology. The AIIS has two research centers in Gurgaon, each with extensive libraries and archives: The Archives and Research Center for Ethnomusicology (ARCE), and The Center for Art and Archaeology (CA&A).

View the American Institute of Indian Studies in the Artstor Digital Library or learn more at the collection page.