New collection: Pacita Abad, a woman of the world Our thanks to the Pacita Abad Art Estate, which contributed 500 images of the artist’s work to the Artstor Digital Library.* The selection in Artstor illustrates the artist’s career from the 1970s to her final years in the 2000s.

Pacita Abad’s work is remarkable for its sense of discovery, as well as its scope. The artist explored the cultures of more than 50 countries in a dazzling array of works created during a career that spanned decades. Faith Ringgold praised a retrospective of her paintings, “not just because of its contents, materials, and messages, but because it is an amalgam of multicultural issues and expressions, all done in rich and vivid colors.” 1

The artist’s global career began in a tiny island in Batanes, the archipelago province of the Philippines. Both parents were members of Congress who dealt with the repressive tactics of the Marcos regime, and Abad became a staunch political activist. After arriving in the United States, her plans for a law degree changed; instead, she turned to formal art studies. Her activism found a voice in visual mediums, as she discovered influences like the social realists Ben Shahn and Alice Neel. 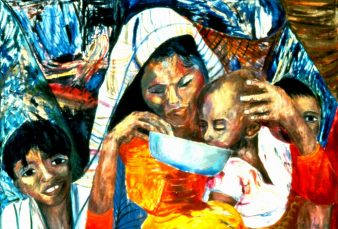 Her innate curiosity took her to the far corners of the world. She created portraits of villagers in Bangladesh and Sudan, painted the streets of the Dominican Republic, and studied the Burkah women of Afghanistan. She trekked to the inner reaches of Thailand and Cambodia to work with refugees; “Water of Life” is from a group of sketches done in the camps of Kampuchea. Abad examined the immigrant experience at various points in her career; an immigrant herself, she felt a responsibility to offer her own perspectives. “L.A. Liberty,” from The American Dream series, is a tribute to the pursuit of freedom that draws so many to the U.S., and to the diverse communities that are the fabric of American life. 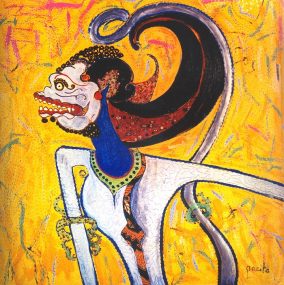 Pacita resisted labels for her work. Although influenced by a range of formal disciplines, her chief inspirations were the people she encountered. A group of Indonesian puppeteers  sparked a fascination with wayang; “Portrait of Hanuman” is one of a number of works based on this traditional art form.2 Tribal displays in Papua, New Guinea inspired Abad to create a series of large masks; a similar inspiration was the basis for six massive paintings entitled “Masks from Six Continents” that were installed inside the Washington DC Metro Center.

Over time, Abad found traditional approaches to painting too limiting. Her works expanded beyond the frame, as well as outward. She incorporated aspects of the cultures she was exploring – literally and figuratively – with a technique she named “trapunto painting.” Using quilting and found objects from the local environment, she created multi-layered pieces of three dimensions. Like other female artists, Abad began to reject fine art conventions; instead, she drew on mediums traditionally used by women as a source of creativity.3 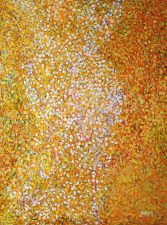 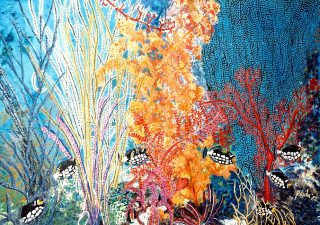 Consistent throughout Abad’s dynamic body of work is her use of color – bright, bold hues that the artist felt were part of her Asian heritage. The brilliant contrasts of her marine scapes, as in “Underwater paradise,” were the result of scuba dives through the coral reefs of her homeland. She also explored color with a more fundamental approach in her abstracts; “I Have One Million Things to Say” was inspired in part by Aboriginal art from the Australian Outback.

Pacita Abad’s career was interrupted by a diagnosis of cancer. To the end, Abad believed that “as an artist, I have a social responsibility for my painting, to try to make our world a little better.” 4 She devoted her final days to a major public work while receiving medical treatments in Singapore. With a crew of helpers, she covered the city’s Alkaff Bridge with 55 different colors; the 180-foot pedestrian bridge was later dubbed “Pacita’s Painted Bridge.”

Pacita Abad’s work can be seen in public, corporate, and private art collections in more than 70 countries. Now Artstor users also have the opportunity to view a selection of her works and read more about her travels.

View the collection in the Artstor Digital Library. Learn more in the Pacita Abad Art Estate page in Artstor.