New collection: Bob Gore, faith-based communities across the U.S. and the Caribbean Our thanks to New York photographer Bob Gore, who contributed approximately 300 images from his portfolio to the Artstor Digital Library, documenting diverse expressions of faith across the United States and in the Caribbean region.*

In a season when people of many faiths come together, we offer a collection that highlights diverse communities and their beliefs. The grandson of a minister, Gore grew up in the Baptist church, but his calling as a photographer has led him to houses of worship of many different denominations.

The Kwanzaa service, featured above, is a celebration that was designed for African Americans to connect with their cultural history. Since it was established in the 1960s, the holiday has come to be celebrated by millions at this time of year. Many households observe the seven days of Kwanzaa with the holidays of Christmas and the New Year. Gore approaches his subjects as a fellow worshiper. He is an active member of the Abyssinian Baptist Church in Harlem, which is famous for its gospel tradition. As in this portrait of a soloist, Gore often highlights the power of the arts – music, dance, and visual mediums – to transform religious events. The Abyssinian is also known as one of the most influential African American churches – and not just due to the large size of its congregation. The Church had a historic role in the civil rights movement, in large part due to the leadership of its ministers. Adam Clayton Powell Jr., arguably its most famous pastor, served in Congress for nearly three decades advocating legislation for social justice.1 The role of religion in addressing social issues runs through the collection. The interfaith ceremony depicted here in an “Annual Tribute to the Ancestors of the Middle Passage” commemorates those who were enslaved during their voyage across the Atlantic. Prayers, song, drumming, and words of remembrance are offered; in a special water ceremony, flowers are strewn for those who perished at sea. The collection also investigates how various houses of worship reflect the heritage of their members. The Ghana United Methodist Church was established for those compelled to leave Ghana who wanted to continue their own form of worship. Several aspects of their cultural identity are integrated into the service: traditional music is used by women of the choir wearing ceremonial dress from their homeland. 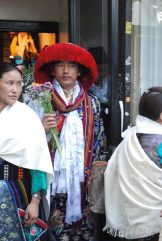 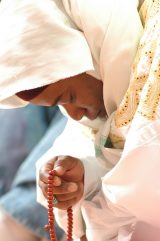 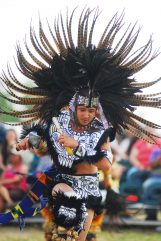 Gore has also worked in the Caribbean, where he documented the Maroon community of Jamaica and a ministry’s humanitarian work in Haiti. This collection highlights a range of religious practices and ceremonies from his own backyard: New York City. A Nepalese groom emerges from a wedding party in Brooklyn; a woman prays during Eid, a holiday observed by Muslims that marks the end of Ramadan; and a ceremonial dancer at a powwow captures some of the excitement of one of the largest Native American gatherings in the Northeast.

The photographer estimates that he has shot almost half a million images during a career that spans decades. He is the author of We’ve Come This Far: The Abyssinian Baptist Church a pictorial history, and contributed to other books such as Reflections in Black: A History of Black Photographers 1840 to the Present. His photographs have appeared in a number of newspapers and magazines and his work has been exhibited at galleries and venues across the country, including the African American Museum in Philadelphia and the Schomburg Center for the Research in Black Culture in New York.

View the collection in the Artstor Digital Library or learn more in the Bob Gore: Faith-based Communities page in Artstor.

*Image totals may vary in different countries depending on their copyright laws.