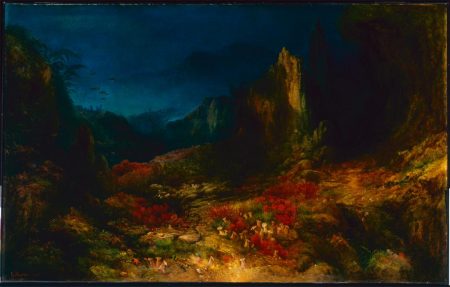 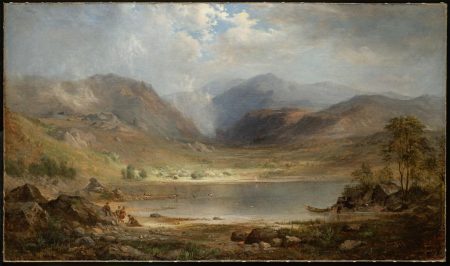 For instance, the collection of Hudson River School painting includes Edward Moran’s The Valley in the Sea (1862), perhaps the only panoramic underwater scene in 19th-century American art. Its majestic vista and meticulous attention to detail capture an aquatic equivalent to the terrestrial scenic wonders that fascinated Hudson River School painters. Meanwhile, Robert Seldon Duncanson’s Long Loch (1867) demonstrates the breadth from which 19th-century African American artists created as the painting reflects his travels through Scotland and interests in Sir Walter Scott’s novels. Being the first native school of American painting, the Hudson River School is a critical component of the American canon and IMA’s collection illustrates that its practitioners stretched far beyond the American landscape. 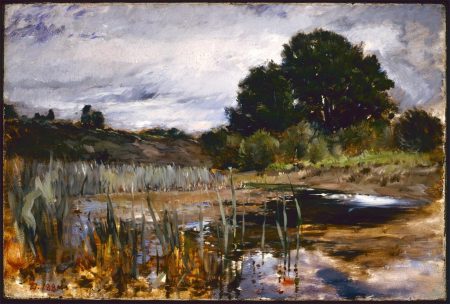 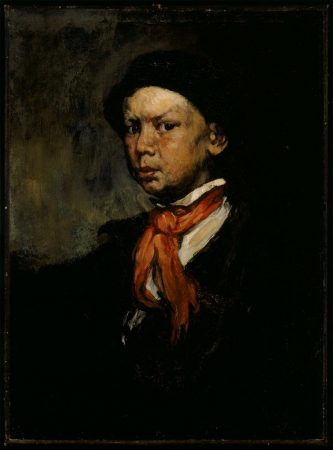 Joseph Frank Currier, The Whistling Boy, about 1873. Image and original data provided by the Indianapolis Museum of Art at Newfields 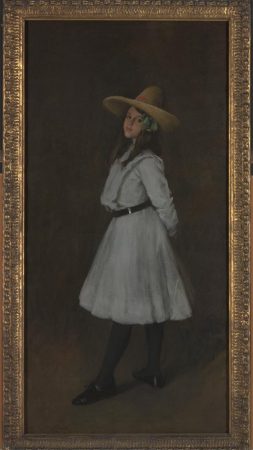 IMA’s collection of American Impressionism has the unique ability to showcase the local history of Indiana impressionists, while simultaneously presenting the broader national narrative. Its great depth in Munich School painters such as Frank Duveneck, Joseph Frank Currier, and William Merritt Chase offer an extensive look at the distinct dramatic tones and bold contrasts of light specific to the style. Thus, works like Duveneck’s Polling Landscape (1881), Currier’s The Whistling Boy (ca. 1873), and Chase’s Dorothy (1902) serve as art historical links to Indiana impressionists T.C. Steele, William Forsythe, and John Otis Adams who each studied at the Royal Academy in Munich in the late 1880s. 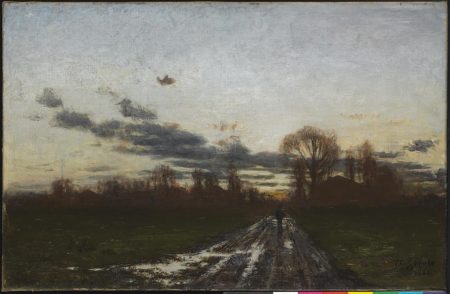 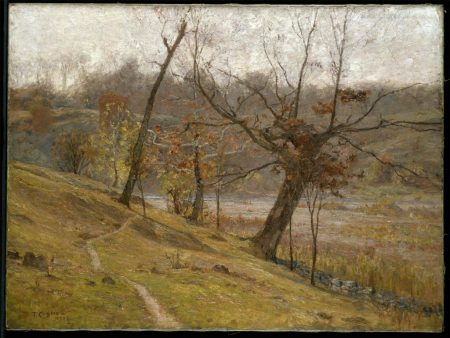 T. C. Steele, The Bloom of the Grape, 1893. Image and original data provided by the Indianapolis Museum of Art at Newfields

Upon returning to Indiana, Steele, Fortstyhe and Adams, along with Otto Stark and Richard Gruelle, formed the Hoosier Group and dominated the Indiana art scene in the early 20th century. IMA’s collection includes a variety of works by Steele that showcase his dexterity, particularly his command of light. For example, Sunrise (1886) is rendered in the typical dark Munich style and is his only known Munich scene painted after he returned from Germany. In contrast, his best known landscape The Bloom of the Grape (1893), with its subdued yellows juxtaposed with royal purples, was awarded honorable mention at the 1900 World’s Exposition in Paris, bringing international recognition to Indiana painting. 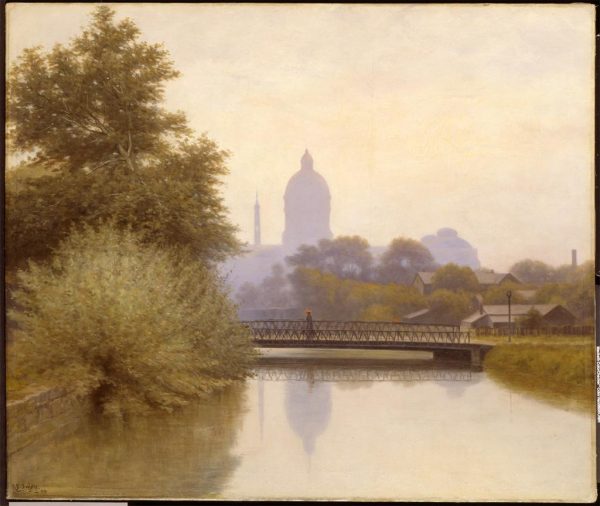 Richard Buckner Gruelle, The Canal–Morning Effect, 1894. Image and original data provided by the Indianapolis Museum of Art at Newfields

Richard Gruelle’s masterpiece The Canal – Morning Effect (1894) is an Indianapolis icon with its picturesque display of the city’s skyline and infamous Central Canal. Bathed in morning light, Gruelle’s depiction of downtown Indianapolis accentuates IMA’s rich collection of American Impressionism that includes works by Frederick Carl Frieseke, Edmund Charles Tarbell, John Henry Twachtman, and Childe Hassam. However, IMA’s collection also provides a look at African American Impressionists, specifically John Wesley Hardrick. As a teenager, Hardrick trained in portraiture with Otto Stark at Emmerich Manual Training School and in 1910 enrolled in the John Herron School of Art, where he became well versed in the Hoosier Impressionist style. Through close training with William Forsythe, Hardrick’s Brown county landscapes glimmer with light from his vigorous brushstroke and deep impasto. Thus, Hardrick’s magnificent renderings of the Indiana countryside hang alongside both his mentors and his contemporaries to provide a larger view of American Impressionist painters. 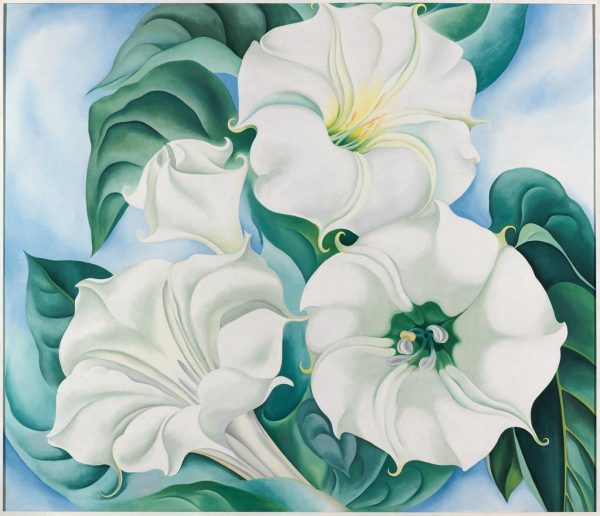 The shining star of IMA’s American modernist collection is undoubtedly Georgia O’Keeffe’s Jimson Weed (1936), but recent evidence indicates that the famed painter was not always confident about her floral musings. In a 1936 letter to her friend, documentary filmmaker Henwar Rodakiewicz, O’Keeffe states that she must have been “absurd about wanting to do a big flower painting.” Nonetheless, Jimson Weed is one of her largest floral still-life paintings and was her first commercial commission for cosmetic executive Elizabeth Arden.

In addition to painterly gems like Jimson Weed, IMA’s 20th-century collection also expands the perception of American modernism, placing artists like O’Keeffe, Arthur Dove, and John Marin in conversation with later modernists such as Romare Bearden and Hale Woodruff – who shared a studio with John Wesley Hardrick during their time together as emerging American painters from Indiana – to demonstrate how modernist visual aesthetics were also used to communicate the wonder of African American life.

You can enjoy these rewards and much more by visiting IMA’s collection in the Artstor Digital Library.

Originally from Detroit, MI, Dr. Kelli Morgan earned her doctorate in Afro-American Studies and a Graduate Certificate in Public History – Museum Studies from the University of Massachusetts Amherst (UMass). A critical race cultural historian, Morgan specializes in American art and visual culture. Her interdisciplinary research concentrates primarily on historic African American women artists, however her curatorial work often examines, critiques, and theorizes the ways in which American artists, art objects, art history, and art institutions both challenge and reify the systematic mechanisms of anti-Black violence and oppression in the United States. Currently, Dr. Morgan is Associate Curator of American Art at the Indianapolis Museum of Art (IMA) at Newfields.