A landmark offering of 500 new images by one of America’s most celebrated political artists during World War II. 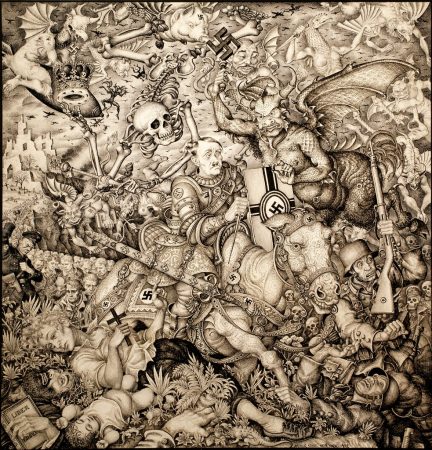 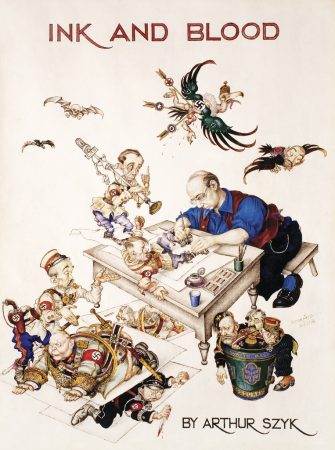 A self-described “soldier in art,” Arthur Szyk (pronounced “Shick”) was an unparalleled artist and illuminator, a proud son of Poland, and a dedicated activist who used his pen and brush to advocate for religious tolerance, racial equality, and human dignity. Active in the years leading up to World War II and during the Holocaust, Szyk confronted the hateful and inhumane policies of the Nazi regime. Using powerful artistic depictions, he lampooned and lambasted the Axis and its leaders, Hitler, Mussolini, and Hirohito. Szyk’s expansive career also included illuminations, in subjects as diverse as biblical stories, Americana, and literary classics. Many of his works were published as limited edition fine art books and as covers and editorials in periodicals such as Collier’s, Esquire, TIME, The New York Post, and The New York Times. This collection represents a significant number of Szyk’s World War II-era drawings, illustrations, and paintings, as well as his magnificent illuminated manuscripts celebrating Jewish subjects and history from his 1920s Paris period to his postwar Americana illuminations.

Born in 1894 to a middle-class Jewish family in Łódź, Poland, Arthur Szyk began his formal art education at age fifteen, when he traveled to Paris to attend the prestigious Académie Julian. There he studied under Marcel Baschet and Henri Royer, and alongside fellow students Diego Rivera, Jean Arp, and Thomas Hart Benton. Unlike many of his contemporaries, who would pursue more abstract styles of modernist painting in their careers, Szyk was enthralled with traditional art forms, particularly with the ornate surfaces and technical virtuosity of medieval illuminated manuscripts. This text-based medium—along with Slavic folk art, nineteenth-century Polish history painting, early German woodcuts, and Renaissance-era portraits—would profoundly influence his later works. While Szyk’s stylistic interests aligned with the past, current events were ever present. As a student in Paris, Szyk would regularly send satirical drawings to Łódź newspapers, culminating in his first book of published caricatures, Rewolucja w. Niemczech (Revolution in Germany) in 1919, the first in a long and prolific career of political commentary.

Following his brief military conscription in the Russian Army during World War I, Szyk began to earn a reputation throughout Europe for his series of beautifully illuminated manuscripts that demonstrated his commitment to democratic ideals and freedom. His Statute of Kalisz portfolio (published in Munich, 1932), for instance, celebrates the 13th-century document of the same name (known colloquially as the “Jewish Magna Carta”) that granted civil and religious privileges to the Jews of Poland. In 1933, Szyk’s first visit to America coincided with an exhibition of his series Washington and His Times (published in Vienna, 1932), a visual celebration of the first president of the United States and the heroes of the American Revolution. The 1930s also saw the creation of one of the most stunning works in Szyk’s career—his magnum opus of fine art, religious text and political commentary—the Passover Haggadah (published in London, 1940). Within this 48-page illuminated text, Szyk relates the parallel narratives of oppression that underscored both the ancient Hebrews’ Exodus from slavery in Egypt and modern-day European Jews in Nazi Germany. 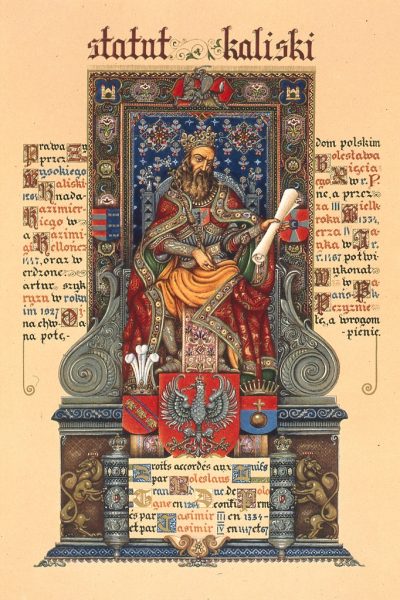 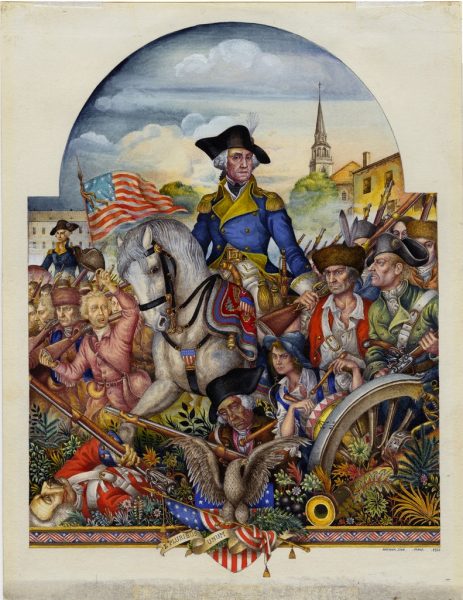 Arthur Szyk, Washington the Soldier from Washington and His Times series. Paris, 1930. Watercolor, and gouache on paper. Image and original data provided by Irvin Ungar. 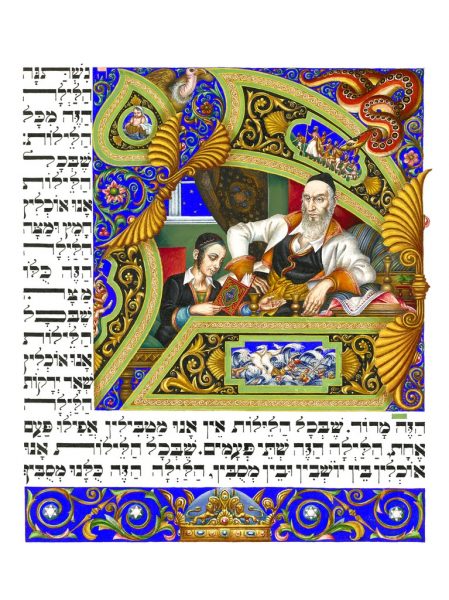 Arthur Szyk, The Four Questions from The Haggadah. Łódź, 1935. Watercolor and gouache on paper. Image and original data provided by Irvin Ungar.

Following the German invasion of Poland in 1939, Szyk’s attack on the Nazi regime and the Axis powers would become his singular focus and most urgent responsibility as an artist. During the early stages of the Holocaust, Szyk immigrated to the United States and soon became the leading anti-Nazi artist in America. Working quickly to introduce American audiences to the aggressors and victims of the war in Europe, Szyk produced a book of satirical political drawings called The New Order in 1941. Published five months before the U.S. entered the war, The New Order became one of the earliest books of its kind about WWII to be published in America. Szyk’s ability to effectively provoke outrage at the Nazi regime’s inhumanity, as well as to enlist viewers’ sympathies for those who suffered, led to a prolific number of the artist’s anti-fascist illustrations appearing on the covers of leading magazines, as well as editorial illustrations in the nation’s top newspapers. Commercial art commissions led to designs for patriotic billboards and posters in support of the war effort, and major companies such as U.S. Steel, Coca Cola and General Motors sought Szyk out for their newspaper and magazine advertisements. American soldiers at more than 500 USO bases and recreation centers were inspired by traveling exhibitions of the artist’s biting caricatures and cartoons of Hitler, Mussolini, and Hirohito. While memorable in their ridicule of the Axis powers, many offer indelible images of the horror of WWII and the Holocaust, as in his haunting image of Adolf Hitler in Anti-Christ (1942), one of the most iconic portraits of evil in the twentieth century. 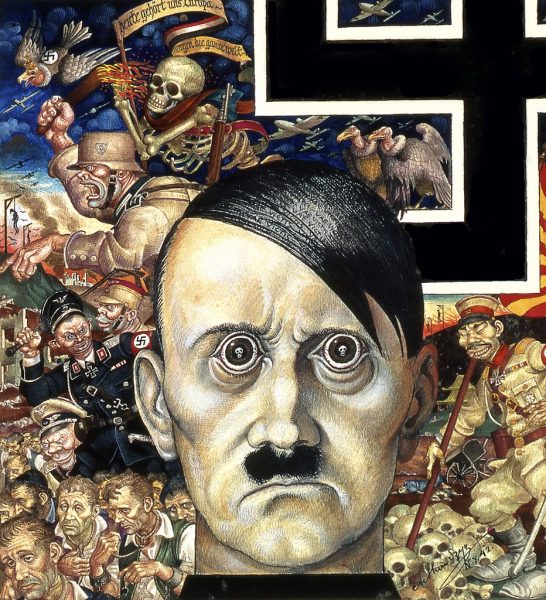 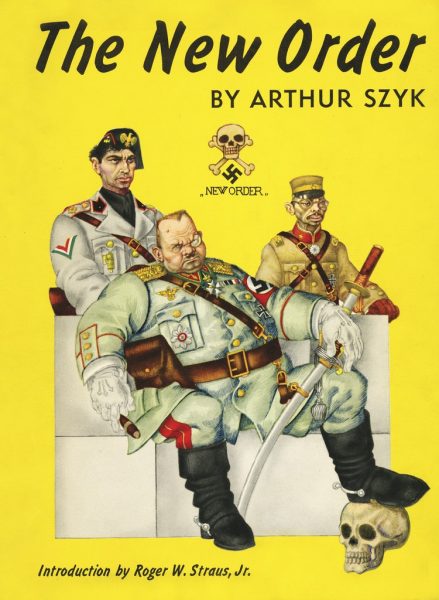 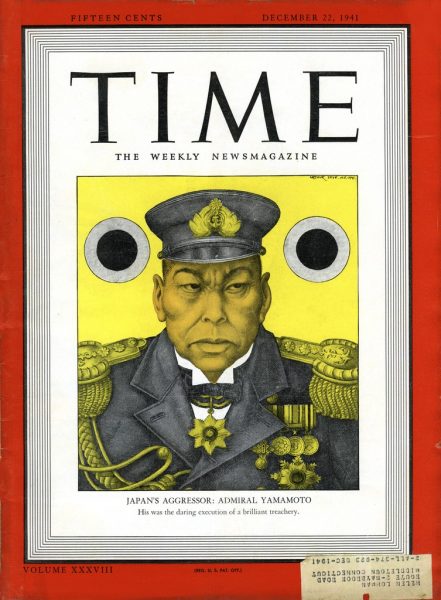 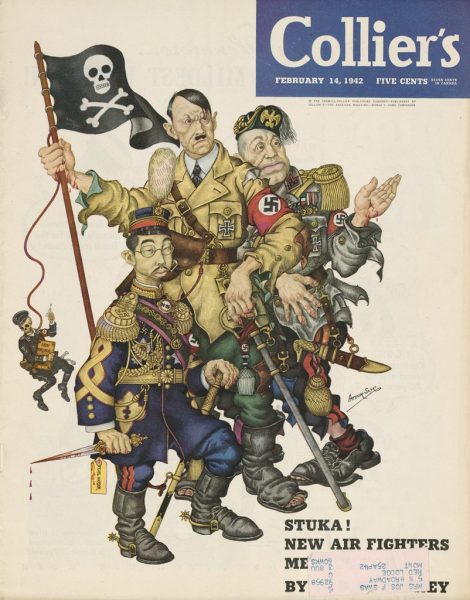 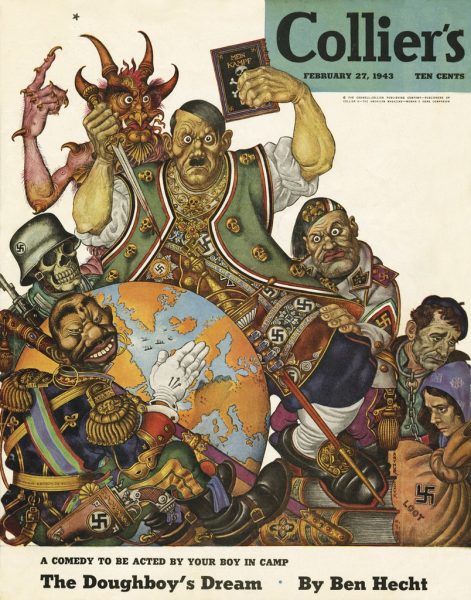 Arthur Szyk. He Who Rules by the Sword on Collier’s magazine cover. February 27, 1943. Magazine. Image and original data provided by Irvin Ungar.

Though his satire proved popular and effective with American audiences, Szyk also frequently appealed to his viewers’ compassion and sense of decency by denouncing the wartime suffering of innocents. A fierce advocate on behalf of Europe’s Jewish refugees and for the establishment of the State of Israel, Szyk produced more Holocaust art during the war than any other artist, and his images were among the most widely distributed and reproduced of that era. Remarkable works like De Profundis (1943) and The Ballad of the Doomed Jews of Europe (1943) helped spread word of the Holocaust through their various reproductions in articles, advertisements and pamphlets. Szyk’s Holocaust works could also be profoundly intimate. In one of his most personal drawings, We’re Running Short of Jews (1943), Hitler, Göring, Goebbels, and Himmler react to the latest news: “Gestapo reports 2,000,000 Jews executed. Heil Hitler.” Szyk’s inscription, “To the memory of my darling mother, murdered by the Germans somewhere in the ghettos of Poland,” reveals that this staggering number includes his own mother, Eugenia Szyk. Similarly, the tombstones featured in Oh Ye Dry Bones, Hear the Word of the Lord (1944) are each inscribed with names of ghettos and concentration camps. Most prominently featured is Majdanek, a Polish death camp built on the outskirts of Lublin, where Szyk believed his mother was killed. 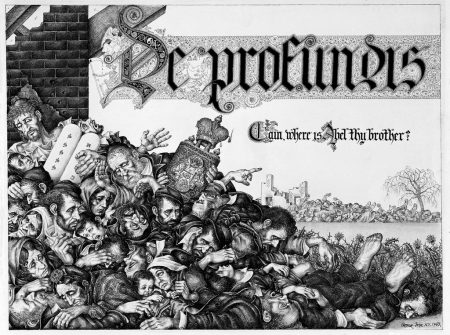 Arthur Szyk, De Profundis: Cain, Where is Abel Thy Brother? New York, 1943. Pen, ink and graphite on board. Image and original data provided by Irvin Ungar. 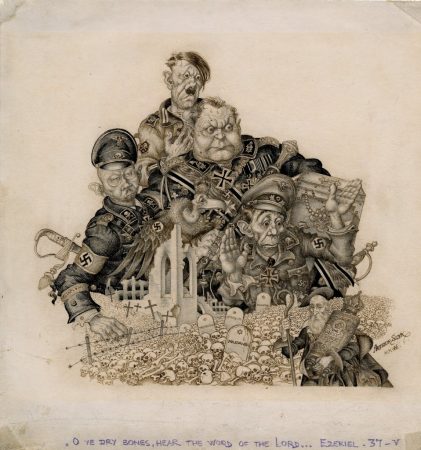 Following the war, Szyk turned his attention to injustice and oppression on the home front, most notably with works that examined racial inequality for African Americans, as in Do Not Forgive Them, Oh Lord… (1949). His postwar works frequently condemned racial discrimination against African Americans, especially soldiers who honorably served their country. While Szyk fought for parity on behalf of marginalized citizens in his adopted homeland, he also continued to fight for the independence and security of the Jewish people by creating artworks that promoted Jewish statehood. Between 1945 and 1948, Szyk created countless images in favor of a Jewish state, culminating in the lushly illustrated Proclamation of the Establishment of the State of Israel (1948), commemorating Israel’s declaration of independence. 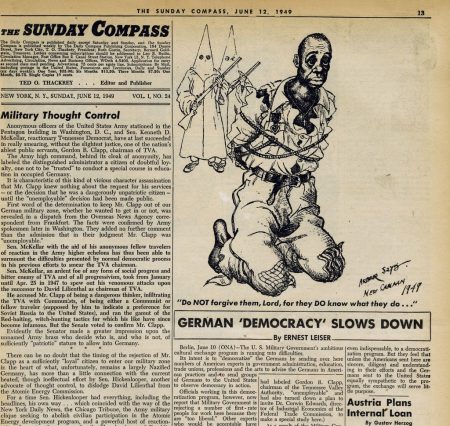 Arthur Szyk, Do Not Forgive Them Oh Lord, For They Do Know What They Do! New York, 1949. Newspaper. Image and original data provided by Irvin Ungar. 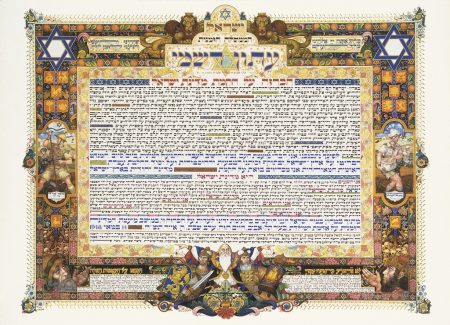 Arthur Szyk, Proclamation of the Establishment of the State of Israel, New Canaan, 1948. Lithograph on paper. Image and original data provided by Irvin Ungar.

After the war, Szyk moved to New Canaan, Connecticut with his family in 1946 and was naturalized as an American citizen in 1948. He returned to a productive career as a fine artist and book illustrator, contributing to such literary classics as Andersen’s Fairy Tales (published in 1945), The Canterbury Tales (1946), and The Arabian Nights Entertainments (published posthumously in 1954). In the last few years of his life, Szyk produced his greatest Americana artworks, including The Bill of Rights (1949), Four Freedoms Prayer (1949), and The Declaration of Independence (1950), all three of which now reside in the Library of Congress. Szyk also celebrated the achievements of nations throughout the world, as in his Visual History of Nations series (1945-49), which recognizes the contributions of the United States and other countries of the United Nations to world history. 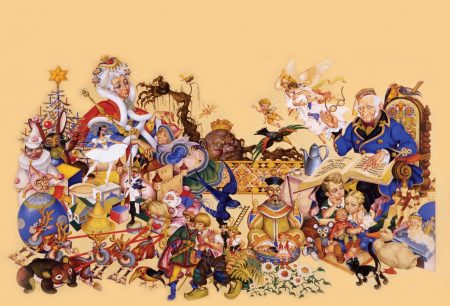 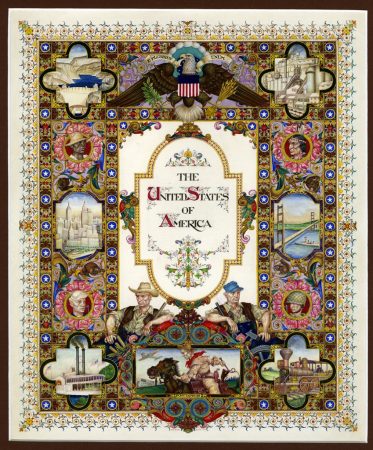 In 1951, Szyk died of a heart attack in his New Canaan home. Until the end of his life, he remained a citizen of the world, creating art that celebrated and fought tirelessly for not only the people of Poland, where he was born; Israel, the land of his people; and America, his adopted home—but for all of humanity. Although 2021 marks the 70th anniversary of Szyk’s death, he remains a timeless messenger for the values of justice, freedom, and equality that his art so compellingly and urgently communicates.

Irvin Ungar, a former pulpit rabbi and antiquarian bookseller, has devoted the past quarter-century to scholarship on Arthur Szyk. He has curated and consulted for numerous Szyk exhibitions, including the Fine Arts Museums of San Francisco; the Deutsches Historisches Museum, Berlin; the United States Holocaust Memorial Museum, and the Library of Congress, both in Washington, D.C.; and the New-York Historical Society. Ungar is the author of Arthur Szyk: Soldier in Art, which received the 2017 National Jewish Book Award, co-producer of the documentary film, “Soldier in Art: Arthur Szyk,” and the creator and publisher of the luxury limited edition of The Szyk Haggadah. He has also served as the curator of The Arthur Szyk Society in Burlingame, California.

Samantha Lyons, PhD, is a San Francisco Bay Area-based curator, writer, and art historian. As a research associate for Historicana, she has organized the first large-scale digital display of Arthur Szyk’s work on Artstor. She also co-wrote and edited the forthcoming publication Arthur Szyk Preserved, the first comprehensive catalogue of Arthur Szyk’s original artworks in institutional collections. Her published articles on Szyk can be found in The Jerusalem Report and Algemeiner Journal. As a curator, Lyons has developed exhibitions on modern and contemporary art while working in the curatorial departments of San Jose Museum of Quilts & Textiles and the Spencer Museum of Art in Lawrence, Kansas. She received an MA and PhD in Art History from the University of Kansas.