Great news for those who enjoy discovering unexpected new images in Artstor: We made some changes that make it easier to browse works by a single creator and images related to a specific subject!

Now, when you view an image record in Artstor, you can click the name in the creator field to search for other works by the same creator, such as the example below showing works by the photographer Pierre Louis Pierson.

We are working on refreshing our educational webinars for upcoming classes, and we’d love to know what kind of content would be most helpful to get your students and faculty off and running. Let us know by answering our brief five-question survey. Attributed to Jean de Touyl. Reliquary Shrine from the convent of the Poor Clares at Buda. ca. 1325-50. Image and data courtesy the Metropolitan Museum of Art; The Cloisters Collection.

Relics—bits of bone, clothing, shoes or dust—from Christian martyrs became popular in Western Christianity in the Middle Ages. The cult of relics dates back to the second and third centuries, when martyrs were persecuted and often killed in ways that fragmented the body, which was taboo in Roman society. The intention was to desecrate the body through execution and burning. But, Caroline Walker Bynum and Paula Gerson state that by the “late third to early fourth centuries the fragments of the martyrs had come to be revered as loci of power and special access to the divine” and, by the Second Council of Nicea in 787, relics were required for the consecration of altars. 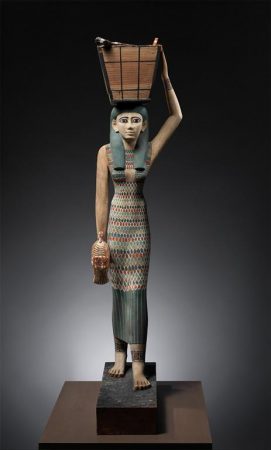 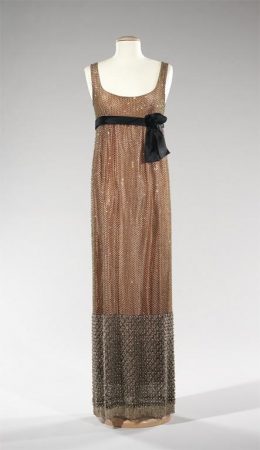 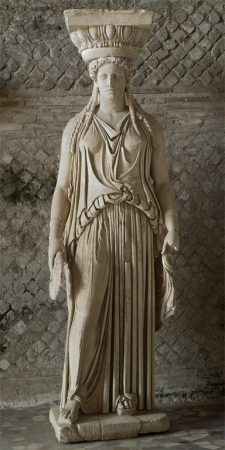 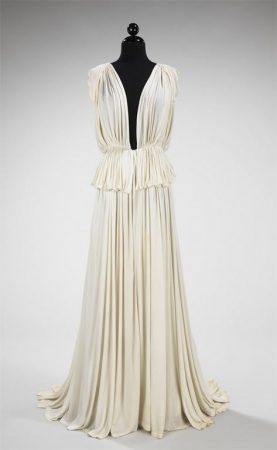 It may come as a surprise that the Artstor Digital Library is flush with fashion. For a dose of glamour, how about a stroll down the red carpet, exploring designs through the ages?

Let’s begin with the ancients: In early dynastic Egypt, the beadnet sheath dress is often depicted in paintings and statuary. A faience (sintered-quartz ceramic) dress from the Museum of Fine Arts, Boston, reconstructed from thousands of beads found in a burial site, is our oldest surviving example from approximately 2551–2528 BC (this particular garment was used to dress a mummy). In life, these decorative nets were probably worn over plain linen sheaths, giving an effect that approximates the elegant lines of a deftly carved offering figure from the tomb of Meketre (c. 1981-1975 BCE). A similar silhouette is achieved five millenia later in an evening gown by the pioneering American designer Norman Norell through the layering of a peach satin under slip and black rhinestone beaded netting (c. 1963).

In the summer of 1675, Madame de Sévigné, a doyenne of letters, protested from Paris: “It is horribly cold… we think the behaviour of the sun and of the seasons has changed,” prescient witness to the phenomenon now referred to as the Little Ice Age. Over the last century, scientists and historians have gathered evidence of a prolonged period of global climatic volatility from the thirteenth to the mid-nineteenth centuries, culminating in a cooling trend in Northern Europe during the 1600s — frigid winters and wet, cold summers. As we bear our share of winter hardships, it might be comforting to gain some historical and pictorial perspective on the polar vortex.

The art of plenty: in praise of still life painting Every year the subject of food rises in our thoughts and comes into greater and more glorious focus as we are swept up in a wave of planning, preparation, and consumption for the holidays. In anticipation and celebration of our sumptuous banquets and stolen treats, Artstor offers a feast of foodie still lifes. Think of this selection as an appetizer: with heaping mounds of fruit, Bartolomeo Bimbi’s monumental Pears (1699) heralds the abundant extreme of the genre.

The strange fates of pillaged mummies In an 1898 article for Scientific American, a chemist describes his process for working with a powdered material that smelled of myrrh and meat extract:

On heating the powder turns dark brown black, with a pleasant, resin-like odor of incense and myrrh, then throws out vapors with an odor of asphaltum; it leaves a black glossy coal which leaves behind when burnt 17 percent of ash with a strongly alkaline reaction, evolving plenty of carbonic acid when sprinkled with acids. In the closed tube vapors of acid reaction are obtained. With hot water a yellow brown solution of neutral reaction is obtained which smells like glue and extract of meat when inspissated…”

The powder in question was in fact the ground desiccated corpse of an ancient Egyptian, heated for the purpose of creating commercially-produced oil paint. Shocked? Let us treat you to a short history of the many strange fates of pillaged mummies between the sixteenth and early twentieth centuries.

A brief history of Majolica “Majolica” is the word used to denote the brightly colored, low-fired earthenware commercially introduced by the Minton Company at the 1851 London Exhibition of All Nations. This was in accordance with Herbert Minton’s long-held desire to capture the market of the newly emergent Middle Class. Majolica, a Victorian phenomenon, was a huge success at the Crystal Palace and soon became a worldwide fad, with factories on three continents and Australia to satisfy the buying craze it had inspired. Deborah English, Librarian, The Marilyn Karmason Majolica Reference Library of the Majolica International Society (MIS), has provided a history of the wares to celebrate the addition of the MIS collection to the Artstor Digital Library.

Staffordshire potters first developed lead glazes of green and brown in the 18th Century, but it was not until Herbert Minton of Stoke-on-Trent brought the French chemist Leon Arnoux to England, that more vibrant colors began to appear. This was possible, thanks to Mr. Arnoux’s previous work with the sumptuous porcelain glazes of Sèvres. Mr. Arnoux also persuaded several prominent French sculptors to join him at Minton, including A.E. Carrier-Belleuse, Paul Comolera, and Pierre Emile Jeannest. They joined the already formidable staff that Mr. Minton had built, including Alfred Lord Stevens, Baron Carlo Marochetti, John Bell, A.W.N. Pugin, and others. Mr. Minton formally introduced his new ware at the Crystal Palace Exhibition in 1851, even though English potters and English-born potters in the USA had been working on the formulas for some time. Arnoux’s saturated colors were the radical boost the new material needed. It soon happened that an astonishing number of forms evolved, sometimes in bizarre combinations.