The Albright-Knox Art Gallery is contributing nearly 2,100 images of their permanent collection to the Artstor Digital Library. The selection in Artstor represents the excellence and breadth of the collection, which consists of works in all media and from diverse cultures, with a special emphasis on postwar and contemporary art.

Established in 1862 as The Buffalo Fine Arts Academy, the Albright-Knox is among the country’s oldest public arts organizations. Since its inception, the museum has been dedicated to the art of its time. In 1863, artist Albert Bierstadt gifted the institution its founding acquisition, his painting The Marina Piccola, Capri, 1859. John J. Albright financed the construction of the museum’s first permanent home, a Greek Revival–style building by Edward B. Green that was dedicated in 1905. A new wing designed by Gordon Bunshaft was later added to the campus. Largely funded by Seymour H. Knox, Jr., the new addition opened to the public in 1962.

In recent years, the museum has acquired the work of Matthew Barney, Theaster Gates, Mona Hatoum, Sopheap Pich, Cindy Sherman, and Rachel Whiteread, among others. These additions and future pioneering acquisitions will assure that visitors shall continue to enjoy a global selection of contemporary art. 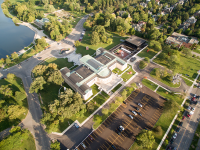