Allan Langdale has contributed nearly 6800 images of architecture, ancient through Renaissance, to the Artstor Digital Library.  The scholar/photographer’s work emphasizes sites in the Republic of Cyprus and Northern Cyprus, and also encompasses Sicily and locations across Eastern Europe, notably the Balkan states.

The unique collection focuses on the lesser known and, in some cases, endangered architecture and archaeological sites of Northern Cyprus. It also includes Bronze Age sites such as Enkomi and the Tombs of the Kings, and the early Christian basilicas of Salamis. Further, the collection highlights the Byzantine architecture of the region, including comprehensive coverage of the better-known buildings, such as the Panagia Kanakaria. Medieval churches of Nicosia/Lefkoşa are also well represented, such as the St. Sophia Cathedral and St. Nicholas Bedestan, and the Abbey of Bellapais. The Lusignan Gothic churches of Famagusta provide another focus, notably St. Nicholas cathedral, St. George of the Greeks, St. George of the Latins, and Saints Peter and Paul.

Allan Langdale is a Lecturer, History of Art and Visual Culture, University of California, Santa Cruz. He holds a Phd in Art History, University of California at Santa Barbara, and an M. A. in Art History, University of British Columbia. His recent books include: Palermo: Travels in the City of Happiness. Art, History & Architecture in Sicily’s Ancient Capital, 2015, and In a Contested Realm: A Survey of the Archaeology and Historical Architecture of Northern Cyprus, 2012.  Langdale is also a documentary filmmaker. He wrote, hosted and co-directed/produced the award winning The Stones of Famagusta: the Story of a Forgotten City. 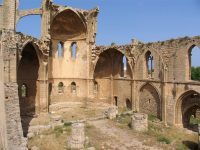