The American Museum of Natural History (AMNH) has contributed more than 1,500 images from its Division of Anthropology, as well as historical photographs from the Research Library’s Photo Archive, to the Artstor Digital Library.

The selection of photographs provides views of the diplays, objects and specimens, staff and activities of the Museum. Many images record how the public, particularly school children, reacted to the exhibits. The pictures, ranging from dinosaurs to fashion history, also tell a story about the people of the city as the twentieth century rolled on. The Research Library currently manages the museum’s historical photographs with the goal of making them more accessible.

Established in 1873, the AMNH’s Division of Anthropology holds more than 500,000 objects representing the peoples of the Americas, Africa, Asia, Europe, and the Pacific Islands. The Division is concerned with all aspects of human behavior, past, present, and with an eye to the future. Its work is biological, socio-cultural, archaeological, and linguistic. As one of the oldest departments of anthropology in the United States, its collections and archives are important resources for the history and continuing work of the discipline.

The American Museum of Natural History is one of the world’s preeminent scientific and cultural institutions. Since its foundation in 1869, it has advanced its global mission to discover, interpret, and disseminate information about human cultures, the natural world, and the universe through a wide-ranging program of scientific research, education, and exhibition. 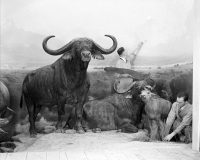