The Amistad Research Center has contributed nearly 300 images to the Artstor Digital Library, focusing on works from the Harmon Foundation by Harlem Renaissance artists.

The selection in Artstor includes the entirety of Jacob Lawrence’s first historical series, The Life of Toussaint L’Ouverture, as well as the work of many other important African American artists such as Romare Bearden, Hale Woodruff, Aaron Douglas, and Elizabeth Catlett.

The Amistad Research Center is the nation’s oldest, largest, and arguably most comprehensive independent archive referencing the social and cultural importance of America’s ethnic and racial history, the African Diaspora, human relations, and civil rights. Its holdings include the papers of artists, educators, authors, business leaders, clergy, lawyers, factory workers, farmers, and musicians. The collection contains approximately 250,000 photographs dating from 1859 onwards, letters and original manuscripts from prominent Harlem Renaissance writers and poets, and hundreds of works by African and African- American artists, including those donated by the Harmon Foundation. 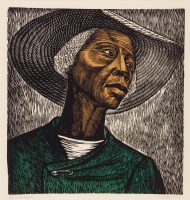