The Barnes Foundation has contributed  more than 400 images of works from the permanent collection to the Artstor Digital Library. The collection in Artstor consists of European and American art,  paintings, prints and drawings, and objects, including nearly 60 works by Matisse.

At The Foundation works of art of different cultures, time periods, and media are juxtaposed in displays arranged by its founder, Albert C. Barnes (1872–1951). Having amassed a fortune developing Argyrol, an antiseptic silver compound, Barnes established his foundation in 1922, “to promote the advancement of education and the appreciation of the fine arts” and commissioned noted French architect Paul Philippe Cret to design a gallery in Merion, PA, for his impressive collection. Today, The Barnes Foundation maintains its gallery in Philadelphia, house in a new building designed by Tod Williams and Billie Tsien, an arboretum in Merion, and an 18th-century farmhouse in Chester, PA, Ker-Feal, home to Barnes’s collection of American decorative arts. The Foundation offers educational programs in art appreciation and horticulture. 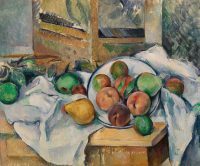