Carnegie Survey of the Architecture of the South (Library of Congress)

The Artstor Digital Library has collaborated with the Library of Congress to publish nearly 7,000 images from the Carnegie Survey of the Architecture of the South, a systematic record of early buildings and gardens in the American South.

These documentary photographs were taken by Frances Benjamin Johnston (1864-1952), one of the first American women to become a prominent photographer. Between 1933 and 1940 with a grant from the Carnegie Corporation, Johnston recorded sites in nine Southern states, mainly Maryland, Virginia, the Carolinas, Georgia, Alabama, and Louisiana, and to a lesser extent in Florida and Mississippi. The Carnegie Survey was an attempt to document the rapidly disappearing antebellum architecture. In addition to recording the great mansions, Johnston was one of the first photographers to capture the vernacular architecture of the region. Her work also includes interiors, furnishings, and architectural details.

Around 1890, Johnston opened a studio in Washington, D.C., embarking on a career as a portrait photographer and freelance photojournalist. In the 1910s, she began to focus on garden and architectural photography. Johnston was one of the first contributors to the Pictorial Archives of Early American Architecture, another collection within the Prints and Photographs Division of the Library of Congress. As a result of the Carnegie Survey, Johnston published two books, The Early Architecture of North Carolina (1941) and The Early Architecture of Georgia (1957), and was recognized with an honorary membership to the American Institute of Architects in 1945.

This Carnegie Survey is one of several collections related to Johnston housed in the Prints and Photographs Division of the Library of Congress. The entire Frances Benjamin Johnston Collection includes 20,000 photographs and 3,700 negatives.

Founded in 1800, the Library of Congress is the nation’s oldest federal cultural institution and serves as the research arm of the United States Congress. It is the largest library in the world, with more than 160 million items on hundreds of miles of shelves. Within the Prints and Photographs Division alone, there are more than 15 million visual images, including photographs, prints, drawings, and posters. 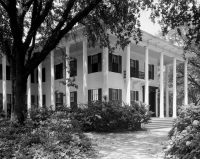