A. Cemal Ekin has contributed approximately 50 images of the Hagia Sophia to the Artstor Digital Library.

Located in Istanbul, Turkey, the Hagia Sophia (“Holy Wisdom”) is a masterpiece of Byzantine architecture. First dedicated in 360 CE, the current building was commissioned by Emperor Justinian I between 532 – 537 CE, and designed by Isidore of Miletus and Anthemius of Tralles. In 1453, the structure was converted into the Ayasofya mosque, then subsequently secularized as a museum by the Turkish government in 1934. The Hagia Sophia is famous for its massive central dome and richly decorated interior. Ekin photographed the dome from scaffolding erected during a recent restoration. From this unique vantage point 180 feet above the ground, Ekin captured images of the center of the dome, its ceiling, the windows, and the mosaic and calligraphy decorations, as well as views into the narthex and interior spaces below. Ekin also photographed panoramic views of the cityscape of Istanbul from the roof.

A. Cemal Ekin is an accomplished photographer and Professor of Marketing Emeritus at the School of Business at Providence College in Providence, RI, having retired in 2102 after 36 years of teaching. He holds an M.B.A. from Michigan State University and a Phd. from Adana Academy of Economic and Commercial Sciences (now part of Çukurova University). 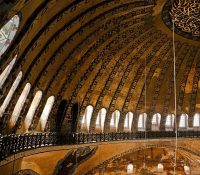