The Foundation for Landscape Studies has contributed nearly 500 images of late 19th century Italian landscape architecture from the Century Association Archives Foundation (CAAF). The photographs were taken by Charles Adams Platt as he toured Italy’s gardens and villas c. 1892. The resulting albumen print collection culminated in Platt’s celebrated book Italian Gardens (1894), which is credited with influencing the Beaux Arts movement in American landscape architecture. The images in Artstor have been scanned from Platt’s albumen prints.

Charles Adams Platt (1861-1933) was one of the most celebrated American architects and landscape designers of the early 20th century. His most influential projects include the design for the Freer Gallery of Art in Washington, D.C., the estate gardens of William Mather Gwinn near Cleveland, Ohio, the Maxwell Court in Rockville, Connecticut, and Villa Turicum in Lake Forest, Illinois.

The CAAF was established in 1997 to preserve, organize, and administer the historical records of the Century Association, founded in 1847. 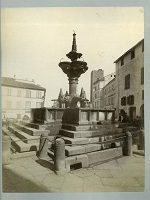