The Chinese Culture Center of San Francisco (CCC) has contributed more than 450 images to the Artstor Digital Library that explore the rich cultural nexus between tradition and innovation among 9 Chinese artists.

Founded in 1965, CCC challenges perceptions and encourages risk-taking by bringing critical visibility through open dialogue. It has a well-earned reputation as “the organization that introduced and created a space for the work of contemporary artists from China, and in so doing, worked against the common perception that Chinese culture is quaint and kitschy.” 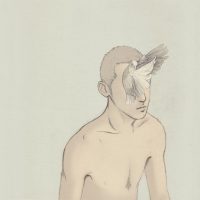 Mu Xi. Flyer no. 2. 2001. Image and data provided by the Chinese Culture Center of San Francisco.