The Colby College Museum of Art has contributed 3,500 images of its permanent collection to the Artstor Digital Library.

Extensive holdings of the work of Alex Katz (b. 1927) are a highlight of the collection. Katz received an honorary doctorate from Colby College in 1984. In 1992, he donated more than 400 of his works to the museum. Today, the collection includes more than 750 paintings, painted sculptures, and works on paper by Katz. A rotating selection is displayed in the Paul J. Schupf Wing, reserved for the work of the artist.

Founded in 1959, the Colby College Museum of Art, now the largest museum in Maine, has built a significant permanent collection of nearly 10,000 works. The museum serves both as a teaching resource for Colby College and as an active cultural institution for the residents of Maine and visitors. In 1999, with a lead gift from Peter and Paula Lunder, the museum opened a new wing designed by the architect Frederick Fisher and Partners, comprising 13 galleries and 9,000 square feet of additional exhibition space. A further addition, also designed by Frederick Fisher, was completed in 2013. 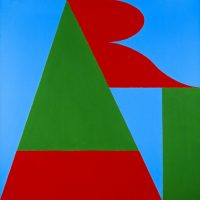