Corning Museum of Glass (CMOG) has contributed 2,784 images of works in its permanent collection to the Artstor Digital Library. The abundant selection in Artstor encompasses all areas of the encyclopedic and unique glass collection.

The Museum was founded in 1951 by Corning Glass Works (now Corning Incorporated) as a gift to the nation for the company’s 100th anniversary. The original concept was developed by Arthur A. Houghton, Jr. (1906-1990) along with his cousin Amory Houghton. It is a nonprofit museum dedicated to telling the story of a single material: glass, a versatile, ancient medium that is still being explored by artists, scientists, and historians today. The Museum holds and displays the world’s finest collection of art and historical glass—more than 3,500 years of history.

The Museum offers demonstrations on glassmaking as well as exhibitions on the technical properties of the material. Further, it is a center for glass scholarship supported by the Rakow Research Library, the world’s foremost archive and reference collection on the history of glassmaking. The architecture of the Museum has consistently featured innovative design with an emphasis on glass. The inaugural international style building by Harrison & Abramowitz was expanded in 1978 by Gunnar Birkerts and an addition was made by Smith-Miller + Hawkinson in 2001. Most recently, the Contemporary Art + Design Wing was completed in 2015 by Thomas Phifer. 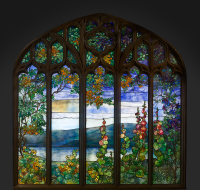