Dr. Deepanjana Danda Klein has contributed more than 3,000 images of cave temples at Ellora, India, to the Artstor Digital Library. Dr. Klein’s unique archive of photographs of the more than 30 rock-cut cave temples at Ellora — Buddhist, Hindu and Jain — was compiled in her doctoral research on the site, in conjunction with Dr. Walter Spink, Professor Emeritus of the University of Michigan, and her husband Dr. Arno Klein. The project is documented at The Ellora caves.

Ellora, a World Heritage site, features outstanding cave temples, dateable between c. 575 C. E. and the end of the 9th century, 20 km north of Aurangabad in the Sahyadri Hills, Maharashtra, India. The caves were excavated into volcanic rock along a 2-km stretch of west-facing embankment. The 34 major caves are numbered consecutively rather than chronologically, starting with the Buddhist group (Caves 1–12) in the south. Other groups are dedicated to the Brahmanical pantheon (Caves 14–29) and to Jainism (Caves 30–34). The Kailasa Temple, Cave 16, represents the culmination of rock-cut architecture, with huge sculptural reliefs underscoring its symbolism as cosmic mountain and as the home of Shiva.

The present photographic campaign represents the first systematic documentation of the entire site and it received funding from Artstor and the Indian government. Dr. Walter Spink speaks to its significance when he says “Due to the knowledge, energy, and technical expertise of Dr. Deepanjana Danda Klein and the enthusiastic cooperation of her husband, Dr. Arno Klein, scholars now finally have a truly comprehensive photographic coverage of this great site’s varied Hindu, Buddhist, and Jain material.” Dr. Deepanjana Klein is currently the International Head of Department for Modern and Contemporary Indian Art at Christie’s. 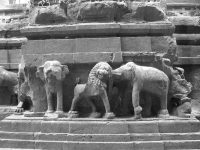