The Detroit Institute of Arts (DIA) has contributed approximately 1600 images of works from their permanent collection to the Artstor Digital Library.

The selection in Artstor provides representative examples across the diverse curatorial departments and includes many highlights, with notable depth in American and European painting, works on paper, sculpture and decorative arts. The DIA has assembled a collection of more than 65,000 objects, offering an encyclopedic view of world art. Since the museum has collected American artists since its founding, the holdings present a broad survey of art in this country from the Colonial period to the present, with masterworks in all media. Other strengths include a distinguished collection of European arts, as well as works from Africa, Oceania, the Americas, Asia, and the Middle East. In 2000 the General Motors Center for African American Art was established as a distinct curatorial department.

In 1885, James E. Scripps, owner of The Detroit News, enabled the incorporation of The Detroit Museum of Art with its largest founding contribution. In 1927, the renamed Detroit Institute of Arts, with its burgeoning collection, moved into a new Beaux-Arts building designed by Paul Philippe Cret. Housing one of the largest collections in the United States, the building also incorporated Diego Rivera’s Detroit Industry fresco cycle (1932-33), which the artist considered to be his most important work in the country. The museum’s extensive collections were augmented by William Valentiner, a scholar from Berlin, who served as director from 1924–45. Valentiner engineered the acquisition of Rivera’s murals, as well as Vincent van Gogh’s Self Portrait (1887), the first of his paintings to enter a public American collection. Two wings were added to the museum in the 1960s and 1970s, and a major renovation and expansion campaign that began in 1999 was completed in 2007. 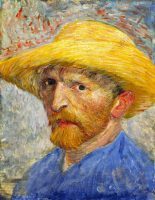