Photographer Donald Woodman has contributed more than 150 images of his work to the Artstor Digital Library.

Donald Woodman (b. 1945) has worked as a photographer for more than 40 years. He was an assistant to Ezra Stoller (1908-1976), and studied with and assisted Minor White (1915-2004) while he was an MA candidate at MIT. His photographs of subjects ranging from architecture to therapy, clouds, the Holocaust, and small-town rodeos, have been exhibited nationally and internationally, and his work is included in the collections of the Victoria and Albert Museum; the Museum of Art and History in Fribourg, Switzerland; the Albuquerque Museum; the New Mexico Museum of Art; the New Orleans Museum of Art; the Butler Art Institute; the Walker Art Center; the Corcoran Gallery of Art; as well as various private collections, including the Polaroid Collection Program. As an accomplished commercial photographer, Woodman’s work has also been featured in publications such as Time Magazine, Newsweek, Vanity Fair, Art in America, and New York Newsday.

As a teacher, Woodman has brought his unique understanding of photography to several universities around the United States, including the University of Texas, Houston, the University of New Mexico, Valencia Campus, and Western Kentucky University.
In addition, Woodman has collaborated with his wife, the artist Judy Chicago, on a variety of art projects. Woodman also produced the photographic work for all of Chicago’s numerous gallery catalogues and art books.

Woodman’s archives are included in the Palace of the Governors Photo Archive at the New Mexico History Museum. 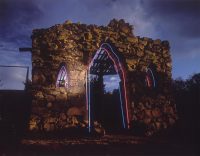