The Yale University Art Gallery has contributed more than 18,000 images related to the ancient sites of Dura-Europos in Syria and Gerasa in Jordan to the Artstor Digital Library.

The collection in Artstor consists of images from the Gallery’s extensive photographic archives, which provide historical documentation of two archaeological expeditions and the artifacts and structures unearthed, as well as images from the Beinecke Rare Book & Manuscript Library’s extraordinary Yale Papyrus Collection, also excavated at Dura-Europos.

From 1928 to 1937, Yale University sponsored excavations at Dura-Europos, Syria, in conjunction with the Académie des Inscriptions et Belles-Lettres. Located on the Euphrates River, the city of Dura-Europos was founded during the Hellenistic period (ca. 300 BCE), eventually being absorbed into the Arsacid Parthian Empire during the 1st century BCE. Known to local people as Dura (or, “the fortress”), the city also passed through Roman rule before being destroyed by the Sassanian Persians around 256 CE. The Gallery’s archive documents both the Greco-Roman and Parthian cultures at Dura-Europos and includes images of the art, architecture, and everyday objects from the city.

During roughly the same period, from 1928 to 1934, Yale University jointly sponsored excavations at Gerasa (modern Jerash), Jordan, with the British School of Archaeology at Jerusalem. Like Dura-Europos, Gerasa was founded during the Hellenistic period (it is located north of Amman, Jordan). In 90 CE, Gerasa became part of the Roman province of Arabia. During the late 1st and 2nd centuries CE, the landscape of the city was transformed through the construction of colonnaded streets and monumental architecture such as temples, theaters, and open public spaces. Under Byzantine rule (ca. 400-600 CE), Christian churches and a Jewish synagogue were built, many adorned with mosaics. The Gerasa archive at the Gallery contains photographic documentation of the architectural remains and mosaics of these buildings, and other finds such as glass vessels, pottery, and lamps, and plans and drawings from the excavation.

The Yale University Art Gallery, America’s oldest collegiate art museum and one of its most important, was founded in 1832 with the collection of patriot-artist John Trumbull. It holds more than 200,000 works, divided among thirteen curatorial departments and ranging from ancient to modern times. For a selection of works from the permanent collection, see Yale University Art Gallery and for other Yale University museums see Yale Center for British Art and Yale Peabody Museum of Natural History all in the Artstor Digital Library.

Opened in 1963, the Beinecke Rare Book and Manuscript Library is Yale University’s principal repository for rare books and literary manuscripts, and it is one of the largest such libraries in the world. Its collections afford study in the fields of literature, theology, history, and the natural sciences, from the ancient to the modern world. 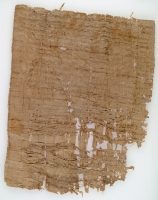 Of Barsabbathas to Heliodoros; from a soldier at Antioch to a centurion at Dura; military and personal matters | Language: Greek | Beinecke Rare Book and Manuscript Library, Yale University