The artist Elizabeth Peyton has contributed more than 170 images of her work, mostly paintings with some works on paper, to the Artstor Digital Library.

Best known for her stylized portraits of friends, pop celebrities, and historical figures, Peyton (b. 1965) creates small-scale, intimate portrayals. Her work is characterized by slender figures with idealized, androgynous features, similar to fashion illustration. While her most typical medium is oil paint, Peyton has also created drawings and prints. Examples of her paintings and drawings are available in Artstor, including portraits of notable sitters such as: artist David Hockney; musicians Kurt Cobain and Liam and Noel Gallagher; actors Leonardo DiCaprio and Chloe Sevigny; historical figures Marie Antoinette and Napoleon Bonaparte; and members of the British Royal family.

A solo exhibition of Peyton’s work began at the New Museum of Contemporary Art in 2008, and included venues at the Walker Art Center, and the Whitechapel Gallery. She has also had exhibitions at the Royal Academy, the Irish Museum of Modern Art, and the Villa Medici, among others. Peyton has also participated in group exhibitions  including Campo at the 1995 Venice Biennale, Greater New York at MoMA PS1 in 2000, and the 2004 Whitney Biennial. 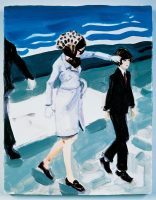