Esto Photographics has contributed 26,000 images of modern architecture from the archive of Ezra Stoller to the Artstor Digital Library.

The selection includes works by renowned architects Frank Lloyd Wright, Alvar Aalto, Marcel Breuer, Mies van der Rohe, Gordon Bunshaft, Eero Saarinen, Louis I. Kahn, I.M. Pei, Philip Johnson, Le Corbusier, Paul Rudolph, Richard Meier, and many others. Stoller is recognized as the leading American architectural photographer of the 20th century. Famous for his meticulous technique, Stoller had an uncanny ability to capture a building from just the right angle and in just the right light. He brought an architect’s eye to the challenge of capturing complex buildings on film, often using non-architectural elements to comment on the structures themselves. Indeed, leading architects would commission him to “Stollerize” their buildings. As a result, many of the exemplars of modern architecture are known primarily through Stoller’s photography. In this way, his iconic images — typically shot with deep focus in crisp black-and-white — would come to define the Modern movement, leaving a lasting influence on architectural taste in the 20th century.

Ezra Stoller (1915 – 2004) founded Esto Photographics in 1966 as an architectural photo agency. Now directed by his daughter, Erica Stoller, Esto arranges new assignments for architectural photographers and manages a comprehensive stock photography archive. Esto collaborates with a number of agencies in Europe. Esto has also partnered with Artstor to share the archive of Wayne Andrews. 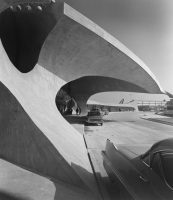