The Fine Arts Museums of San Francisco have contributed nearly 18,000 images to the Artstor Digital Library.

Comprising the de Young in Golden Gate Park and the Legion of Honor in Lincoln Park, the Fine Arts Museums of San Francisco is the largest public arts institution in the city and one of the biggest in the country. Selections from both museums’ collections are represented in Artstor, providing an encyclopedic perspective on world art.

Founded in 1895, the de Young is San Francisco’s oldest museum. Long known as the City’s Museum, it has been recognized for its many educational programs. Its new facility, which opened in 2005, was designed by the Swiss architecture firm Herzog & de Meuron and Fong & Chang Architects. It houses one of the finest collections of American paintings in the United States, with more than 1000 examples from the 17th through the 20th centuries. The de Young collection also boasts strengths in non-Western Art from Africa, Oceania, and the Americas. The Oceania selections were charter collections of the museum, with their nucleus formed in 1894 at the California Midwinter Fair. A highlight is the Jolika Collection of Marcia and John Friede, with over 400 masterworks of New Guinea art. To represent the richness of the art of the Americas, the de Young presents objects from Mesoamerica, Central and South America, as well as the West Coast of North America. The de Young is also notable for its textiles — a wide range of fashion and costume from the 18th century to the present, and one of the most important collections of European tapestries in the United States.

The Legion of Honor was built to commemorate Californian soldiers who died in World War I. A beautiful Beaux Arts building, the Legion is noted for its breathtaking setting in Lincoln Park, overlooking the Pacific and all of San Francisco. The building is home to a collection of European paintings from the 14th through the 20th centuries, and European decorative arts, furniture, and sculpture, including a unique collection of Rodin’s work. An original cast of his Thinker is situated in the Court of Honor. The collection of ancient art includes Mediterranean and Near Eastern antiquities. The Legion also houses one of largest collections of works on paper in the United States. With nearly 100,000 prints, drawings, photographs, and illustrated books, the Achenbach Foundation for Graphic Arts collection spans six centuries and features works by artists such as Dürer, Gauguin, Malevich, Kandinsky, and O’Keeffe, as well as Japanese prints and Persian and Indian miniatures. 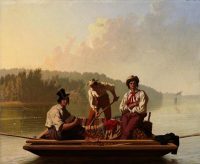 George Caleb Bingham. Boatmen on the Missouri. 1846. Image and data from the Fine Arts Museums of San Francisco.