The “First Fleet” collection from the Natural History Museum, London, was digitized with the support of the Andrew W. Mellon Foundation, and selections are represented in the Artstor Digital Library with 600 images, depicting a variety of landscapes, wildlife, aboriginal people, and events from the early history of the colony in New South Wales.

The Natural History Museum was founded in 1881, though it dates back to the 18th century gift of Sir Hans Sloane (1660-1753), a large collection of natural specimens which was initially housed in the British Museum. Over time, collections were added, such as those amassed by Sir Joseph Banks (1743-1820) during his 1768 voyage to the South Pacific with Captain James Cook on the HMS Endeavour. Banks was an explorer, naturalist, and champion of British colonization of New South Wales, Australia, who urged his government to establish a penal settlement in Botany Bay, where Cook had made landfall in 1768. Eventually, on May 13, 1787, 11 ships set sail from Portsmouth, England to found a colony with the labor of 780 convicts. This “First Fleet” arrived in Botany Bay months later, eventually making a permanent landing in Port Jackson (now Sydney).

The museum’s “First Fleet” Collection is made up of drawings and watercolors, documenting the native landscapes, flora, fauna, and people, produced by members of the expedition. George Raper (1769-1797) was a midshipman, who sailed on the HMS Sirius, flagship of the “First Fleet.” Thomas Watling (b. 1762) was a trained artist and convicted forger of banknotes, whose watercolors make up the bulk of the collection. Finally, there is the Port Jackson Painter, whose oeuvre probably includes the works of 2 or 3 different unknown artists, with some works produced in situ, and others probably created from specimens that had been brought back to England. This particular set of watercolors was originally part of Banks’ private library, and was included in his larger bequest to the museum.

Many of the drawings of plants, birds, mammals, fish, reptiles, arthropods, and mollusks are iconotypes, meaning that the original specimen on which the drawing is based has been lost or destroyed. In some cases, the watercolor represents the only known record of a species for which no specimen has survived. Similarly, the ethnographic images depict the aboriginal people of the Port Jackson area (known as the Eora), who were extinct within 20 years of the first landing. Whether killed outright by the settlers, or by diseases that they brought with them, the only record of the Eora are the watercolors that portray their tools, customs, and activities, as well as named individuals and family groups. 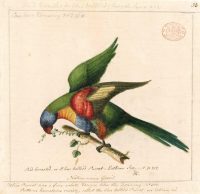