The Fowler Museum at the University of California, Los Angeles has contributed 5,300 images to the Artstor Digital Library. The selection in Artstor centers on the arts of Africa and the ceramics of the Andes.

The Museum’s collections have built largely through the generosity of donors. The core of their African and Pacific holdings and the single largest gift is the Sir Henry Wellcome Collection of 30,000 objects, assembled early in the last century and given to the Museum in 1965. Objects from the Fowler Family Silver Collection include 400 works representing 16th- through 19th-century Europe and the United States. An exceptional collection of more than 900 Mexican works was donated in 1997 by the Daniel Family and includes magnificent ceramic Trees of Life, Day of the Dead figurines, and masks from Metepec, Oaxaca, Michoacan, Jalisco, Puebla, and Guanajuato.

The Fowler Museum at UCLA was established in 1963 to consolidate the collections of non-Western art and artifacts dispersed throughout the campus of the University of California, Los Angeles. As one of the top university museums in the United States, the Fowler initiates research projects, fieldwork, publications, exhibitions, and public programming to enhance the understanding and appreciation of global cultures. 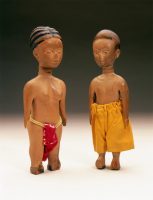